Area 4 does not have a 0th entrance area, but instead there are 8 rooms before the boss, although some of them are optional.

The left side of this room will be quite busy and full of enemies. In contrast, the right side of the room, which contains the seals, is a lot less hazardous. It would be a good idea to move to the right as early as possible. The only item hidden in the left is a mystery tile. There is also a heart closer to the center. The eight seals are hidden along diagonal tiles, with an additional mystery box (or sacred cloth if you lost it) hidden in a tile near the intersection, in the same location where the book will appear.

All of the seals in this room can be found on the left side, just above where you begin. To the right of your starting location, you can find a red orb which will clear out the room for a very short time to give you a head start. There are seven tiles to reveal, but once you collect the book, you're only half finished. The next trick is to get across the transforming bridge. You should watch the bridge to discover a pattern. The tiles transform from left to right, and then from right to left. Then it repeats from right to left, and then left to right again. This patterns continues, so you must attempt to leap across the bridge when the tiles are transforming back to solid tiles from left to right. On the other side of the bridge, you will find a valuable life restoring potion just below the last transforming tile. Optionally, you may also collect a lotus blossom for the fireball weapon towards the bottom.

There is a mystery square in the upper left corner tile, and a heart two tiles down and one tile to the right of that. There is a tile that you can reveal and crack in the middle of the long uninterrupted stretch of ground, but all that you will reveal is a flame jet. There is a second flame jet hidden in the center of the tiles along the top on the right that conceal the seals. You will find a heart to the left of where the book appears, and monk beads in a tile near the bottom closer to the left side of the room. When you collect the book, the screen will flash twice, indicating that more than one door as opened. A second door appears on the left, and this one will advance you on to 4-4. The right door takes you back to 4-2.

This area is divided into two rooms. You will find a heart in the left room, close to your starting location, and the card weapon hidden in the tile in the upper right corner of the left room. There are nine seals that you must reveal in this area, and they are all in the right room. Watch out for the floating head and the wizards that teleport in. You can also find monk beads above the center tile, which is necessary if you want to reveal the 4-8 secret. Once again, when you collect the book, the screen flashes twice. The door in the right room will only take you back to 4-3. Hop to the door in the left room to advance to 4-5.

There are many tiles on the left side of this area, but the only tile with an item contains a heart, not far from where you begin. Head to the right side to find the six seals that are hidden, along with a red orb that will be of slight help when you begin jumping on the tiles. You should be aware of the transforming tile to the right of the flame jet tile, but it is possible to avoid using the tile entirely by leaping to the farther tiles above and below the flame jet tile. There is little else of note in this room. To uncover the game's final secret exit, jump to the block containing the lower right seal on the map and throw boulders at the bottom of the screen until the screen flashes. Then uncover the seal and jump to the next one to warp to 4-8. Otherwise, feel free to take the exit which appears when you collect the book.

Near where you begin, jets of flame will rise out of the ground and travel downward along the floor. Do your best to avoid it. The tile to the far left of the area contains a valuable potion. Be sure to collect it before you advance to the right. The bridge that you must cross has a particularly difficult pattern. Wait for the left most transforming tile to become solid, and immediately leap to the right. Then wait for each consecutive tile to become solid before leaping over to it. Once you cross the bridge, you should not attempt to cross back. There are five seals to uncover, with monk beads hidden below the center tile. You can also find a mystery square all the way to the right.

From the start, you must leap up to the large island, and then over to the right to the small chain of tiles. There are two hearts hidden in the tiles near the left. To reach the four tiles that hide the seals, you must jump down to the tiles near the bottom of the area. There is a card weapon and a red orb on the tiles above and below the tile where the book appears respectively. Once you collect the book, hop as far to the right as possible, and then down and around the bottom tiles until you can leap up straight to the door.

Be careful that, visiting the hidden contents requires the boulder weapon, however the weapon is not easy to hit the final boss. Visit at your own risk.

Area 4-8 is a bonus room, where you can view the game's credits. The five seals are across from each other, with the lowest one being at your starting point. After uncovering the five seals and collecting the book, revealing the door, go to the center tile, and jump while throwing boulders at the pit until the screen flashes to reveal a tile in the middle which allows you to cross. On the other side of the pit, you'll see a message that says "Welcome to Dababa World Staff". Here, you can score bonus points and reveal names of the people who developed this game. Jump to the tile on the far middle-right, face left, and throw two boulders at the pit. The screen flashes and the character designer credits are shown. Face up and throw two more boulders at the pit. The sound composer credits will appear. Finally, face down and throw two boulders at the pit to reveal the programming credits. From here, you can go back to the start and jump up to the door to warp to 4-9. You can also find a heart to the left of the center seal. 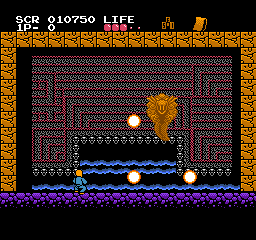 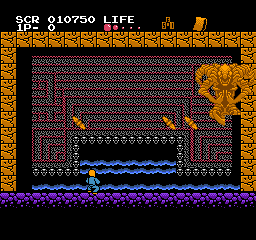 It is here that you will face the final boss of the game. He has two forms. The first form is a weaker form which rises out of the ground, travels left or right in whichever direction you are, and then back down into the ground. While he moves horizontally, he will fire up to three orbs into the air, which you must avoid. You must hit it in the face with your weapon. If you have the card weapon, you can hang out all the way to the left or right, and shoot straight up. The boss will continuously rise and fall to your side, and you will hit it with the weapon as it branches out. When you hit it enough times and defeat it, your beloved will appear and fall from the ceiling. As you are about to catch her, however, the boss will return in its stronger transformed state. It will hover above the ground and fly back and forth. All the while it will throw sticks at you in three directions, which twirl around and bounce off the floor. The boss will constantly replenish these as they disappear. Continously fire upwards in an effort to hit the boss as it's flying around, and avoid the sticks as much as possible. Eventually, you will hit it enough times to defeat it, and you will be presented with the ending where you will rescue your partner. Congratulations.