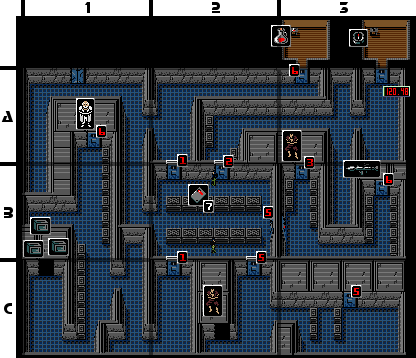 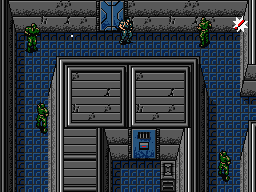 A1: You've now arrived on the second floor. As soon as you leave the elevator, one of the two top guards is sure to notice you and alert the other three guards in the room. They won't summon any backup, so remove them as quickly as possible and continue on. You have some choices, but the left path leads to a dead-end. Of the two paths to the right, take the higher one to A2 so that you can collect an item in A3.

A2: It's a good idea to remain as undetected as possible in this room, although that can be quite difficult. Try to get a feel for each guards patrol route before you step too far into the room. If anyone is likely to notice you, it will be the guard who patrols the upper right corner of the room. That also happens to be your destination. Clear a path so you can use the upper right hallway to access A3. 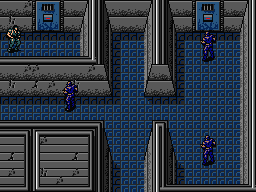 A3: Open the door that you arrive in front of with card 6. Inside will be some blue guards. They require three bullets to take down. They are very likely to see you and summon backup, so do your best to remove all of the guards until the high alert mode comes to an end. Then approach the desk and collect the antidote sitting on the desk, which you may have need of later.

At this time, you must return to A2, although you are very likely to be spotted by guards as soon as you arrive. Your goal is to reach B2 in the center of the floor. This can be accomplished by using card 1 to open the south west door of A2.

B2: Assuming you arrived through the north west door, be prepared to move down immediately after you arrive. This room is guarded by two hulking men who are referred to as the "Arnolds" or the Arnold Brothers, and who will rush at anyone who attempts to access any of the doors in the north and south portions of the room. They will not leave their post, however, so you are perfectly safe to stand in the middle. You have no weapons that are capable of defeating these cyborgs, so ignore them for the time being. Instead, prepare card 5, and open the east door to reach B3. 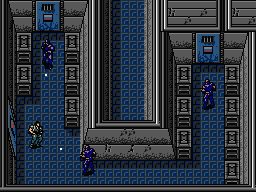 B3: Do your best not to be spotted by any of the guards, and approach the upper left door after knocking out the north guard. Use card 3 to open the door, and inside you'll find a prisoner who has knowledge of a new resistance member, Jennifer, who can be reached on frequency 120.48, but only if you happen to be at the highest (four stars) class. Exit the room, and carefully take out the guards again. The last guard standing still in front of the right door will alternate between looking left, down, right, and down again. Wait until he looks left or right and quickly shoot him. If you enter the room using card 6, you will not find anything inside. Read the spoiler below to learn the secret of this room.

The empty room
If you take the recently rescued prisoner's advice and call Jennifer from outside the room, she will answer (as long as you have four stars) and inform you that she is preparing a rocket launcher for you. When you enter through the right door, it will be waiting for you on the table. You now have a powerful weapon, but you have no ammunition for it, so you'll need to find some.

Return to the Arnolds' room to the west.

B2: You are still unable to do anything about the Arnolds. With six passages to choose from, the best course of action at this time is to open the lower left door with Card 1, and proceed to C2. Rush to the door and pass through it before the lower Arnold has a chance to reach you.

C2: Remove the guard standing in your way along the left side of the room, and follow the passage around to to C1.

C1: Stealth continues to be the name of the game here. Make your way around the walls, taking each of the four guards out when it is safe to do so, until you reach the open door in the upper left corner. Once you step inside, the two guards patrolling the room will instantly notice you, but they won't summon backup. Shoot them both, and then collect the three boxes of ammo in the room. Exit and enter the room as many times as necessary to max out your ammunition (the interior guards will also return and notice you every time), and then exit the room. Take out the guards again on your way out, but this time, head north to room B1.

B1: It's difficult to make it across the central passage of this room without getting noticed by one of the three guards, but it's easiest if you hug the right wall as you enter. If you are spotted, take the time to remove all of the backup that arrives until the high alert mode is over. Then proceed north to room A1. 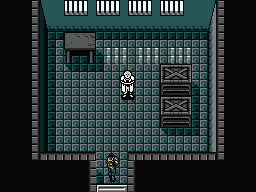 A1: In this center passage, you are safe from detection from the four guards posted along the outside. Prepare card 6, open the door and step inside. You will have finally found Dr. Pettrovich… only to be told that he refuses to help you until you rescue his kidnapped daughter Elen. He will tell you that she is confined in the basement of building 1. (Be forewarned, you can shoot Dr. Pettrovich, and you will lose a star as a result, but if you exit the room and return, so will the doctor.)

With this new knowledge, return to the south, and make your way back to the Arnolds' room at B2.

B2: If you happened to obtain a rocket launcher and some ammunition, you can finally take on the Arnolds (despite what Diane says.) 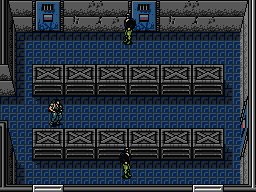 The Arnold brothers are determined, but very single minded. They will only attack intruders that occupy the row that they guard. When someone sets foot in their domain, the rush over to clobber whoever doesn't belong there. Partly made of metal, they are impervious to a number of weapons, particularly grenades, which can't be lobbed over the crates to attack them from a safe position. However, if you are of a high enough rank, you should be able to get assistance from a prideful resistance member who will deliver a rocket launcher to you. This is absolutely required. You cannot kill the Arnold Brothers without the Rocket Launcher. If you load up on ammo, you can take the Arnolds on. There is no particularly safe strategy, you'll simply have to enter each of their rows and prepare to blast them with rockets as quick as you can. You can position yourself in a way to avoid harm while you shoot at them by standing slightly above the bottom Arnold and slightly below the top Arnold. It only takes four rockets to put each of the Arnolds down. They even get knocked back by the blast when they are hit.

Once both Arnolds have been struck with four rockets, they will leave their prized possession behind: access card 7. Be sure to collect it before you exit the room. Now you are free to explore any passage you want. Start by using card 2 on the upper right door to return to A2. Watch out for the guard, and follow the path up and around to A3.

A3: Three guards patrol the main portion of the room. Do your best to remove them undetected, and approach the door in the upper right corner. However, you will find that none of your access cards will work. If you are aware that there are eight access cards, you may think that you need the eighth and final card to open this door, but that will not work either. Read the spoiler below to learn the secret of this door.

The locked door
Once again, you'll need to call upon the help of Jennifer, the resistance member who won't speak to anyone with less than four stars. If you contact her from the room, she will unlock the door. Then you can enter and inside, you will find a compass waiting for you on the desk. Collect this important item and exit the room.

When you're done, exit the room and retrace your steps back to B2.

B2: There's only one unexplored passage left. Use card 5 to open the lower right door to C2. 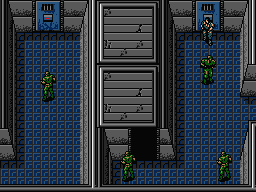 C2: Do your best to get past each of the three guards on the right side of the room undetected, and explore the room behind the open door. You'll find a prisoner who will inform you that you need a compass to cross the desert. Exit the room, deal with the guards again, and take the east passage to C3.

C3: The lone guard that patrols the room has a tendency to fall asleep. Wait until he passes out, and take him down. Then open the door with card 5. Step inside the room, but stop for a moment to investigate the situation. You will see a set of rolling barrels and elevator doors at the far end of the room. In order to reach the elevator, you'll have to time your approach very carefully. As soon as the barrels roll past you to the left, you'll need to race out to the door. Get there as quickly as possible and push up against the door when you reach it. It should open and allow you to enter just before the barrels are about to crush you.

Hop in the elevator, and take it down to the first floor.

After having rescued Dr. Pettrovich's daughter Elen, and escaped through the gas filled basement of building 2, you return to the second floor to speak with Dr. Pettrovich again. You will start in A1, and you must make travel all the way around the west portion of the floor in order to reach the door to Dr. Pettrovich's cell again at the bottom of the screen. Refer to the map above in case you've forgotten the way to reach it. 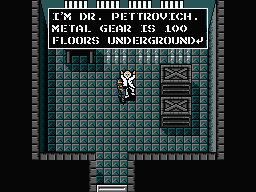 Prepare card 6 and enter Dr. Pettrovich's room. It appears that someone tied him back up while he waited for you to return. Untie him and he will give you the information you need to know. It turns out that Metal Gear is 100 floors below ground in a third building, which is 20 kilometers north of building 2. It's only weak points are the thinly armor legs, and you must plant plastic explosives on them in a specific order. He will tell you that the order is (R for right, L for left): R, R, L, R, L, L, R, L, L, R, R, L, R, L, R… and then he will forget which side to detonate the final explosive, but there must be 16 explosives planted in the end. He will then explain that the Arnolds have the access card to exit from the back of building 2, and he will tell you that they can in fact be defeated with a rocket launcher (although he does not tell you where to find one.)

At this time, you should do one of two things. If you have not defeated the Arnold Brothers in B2, you'll need to find the rocket launcher and do so in order to make it out of the back of the building. Once you defeat, or if you have already defeated, the Arnolds and possess card 7, make your way back to the south elevator at C3, and return to the first floor.