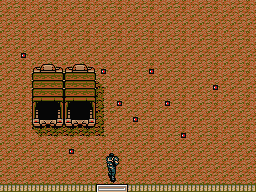 G1: When you exit building one, you begin in the southern portion of the map shown to the right. You will see two trucks sitting idle on the left. The left truck contains plastic bombs. The right truck will actually start moving and return you to the courtyard. You must head north by foot to reach building 2. Unfortunately, you may notice a lot of explosions beneath your feet if you don't use the land mine detector. Activate it so that you don't do yourself any harm and proceed to F1.

F1: The screen is void of any threat beyond land mines. Keep the mine detector activated so you can cross safely to E1 above.

E1: The good news is there are no more land mines. The bad news is, this stretch of land is defended by tank cannon shells. You will hear the whistle of shells dropping through the air and they hurtle down to the earth. However, you will be safe inside the truck which happens to contain rations. Be sure to exit and enter the truck as many times as necessary to hold the maximum number of rations, which is three times the number of stars in your class. When you are prepared to proceed, you can take advantage of a trick through the next two screens. If you ever try moving east or west from these screens, you will simply return to the opposite side of the same screen. Doing so resets the timing at which the shells drop. Run up along the right side, and when you hear the whistle of a shell, cross over to the right. You will reappear on the left side of the same screen and the shell will not fall. Continue running north until you hear the next whistle, at which point, cross back over to the left, and you will reappear on the right side of the screen, safe from the previous shell. Keep doing this as you proceed to D1.

D1: This screen is a same as the previous screen without a truck. Continue to use the same trick of crossing over to the opposite side of the screen whenever you hear the whistle to avoid taking damage from the dropping shells, and make your way north to C1.

C1: You will finally run into a serious threat that you will be forced to deal with in order to proceed. Blocking your progress to the north is a tank. In order to proceed to building 2, you'll have to destroy it. 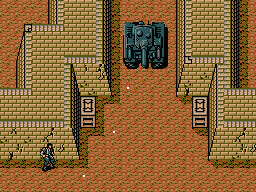 The tank has a main cannon that is flanked on either side by two artillery guns. The guns take turns firing outward, while the main cannon will only fire a shell at Snake if he dares to cross in front of the tank. The tank is nearly impenetrable, with a thick armor that blocks every attack. A quick call to Diane will inform you that the best way to take the tank down is to use land mines. In order to do that, you're going to have to time your approach to the tank when the opposite gun is taking its turn firing. So if you approach from the right, wait for the left gun to start firing, run up to the tank as close as you dare, and drop land mines behind you as you run away and hide behind a crate. As the tank advances forward, it will hit the mines and take a small amount of damage. In the end, it will take 11 mines to destroy the tank, which means your class must be at three stars in order to hold enough mines. Remember that the tank will get all of its health back if you ever leave the screen, even latterly, and if you bring up the inventory or weapon screens, any mines that you laid on the ground will disappear. If you don't have enough mines, it is possible to run past the tank by exploiting a well-timed glitch. First, you need almost against the tank just before it makes the first shot from the side gun. When you are hit, run past the tank while you are invulnerable. This works best if the tank is advancing, but failure means instant death. Such a tactic is reserved if you no longer need Building 1, which is technically true for a faster but more dangerous route that skips otherwise important events.

With the threat of the tank removed, you are free to proceed north to B1. In addition, no more shells will fall from the sky as you traverse the screens to the south.

B1: There is nothing of interest on this screen. Continue north to A1. 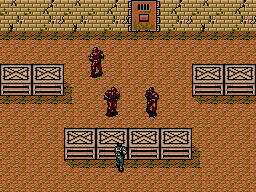 A1: You will finally arrive at the entrance to building 2. When you get there, the guards out front will already be informed that someone has successfully infiltrated the base. Since they are on high alert, the door will not open under any circumstances unless they verify the identity of someone who approaches the building. Big Boss will call you up and tell you to wear an enemy uniform. He will also tell you that from now on, you need to contact him on frequency 120.13. In fact, all of the previous contact frequencies will change. If you managed to collect the enemy uniform already, put it on and step in front of the soldiers. They will not recognize you for who you are, believe that you are one of them, and permit you to enter the building, where you will arrive on the first floor.