E1: Assuming you have found and obtained the oxygen tank, you are prepared to jump in the water and swim up through the water tunnel on the first floor of building 2. One screen to the east of the back entrance to building 2 is this screen. Activate the oxygen tank, hop in the deep part of the water, and swim up through the narrow channel to the north to D1.

D1: As long as the oxygen tank is activated, you have little to fear. If you do not have the tank, you will slowly drown, and you will be unable to use rations while underwater, so you will die if you do not get out of the water immediately. Swim north to C1. 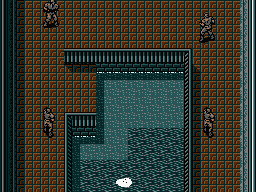 C1: You'll have to continue to swim through the next three screens to reach the end. Clearly, without the oxygen tank, this trip would be impossible. Keep going until you reach B1.

B1: When you reach the end, you will see four guards patrolling the exit. Do your best to exit the water undetected, and take them out so that you can safely proceed north to A1. If you do get detected, however, they will not call for backup. 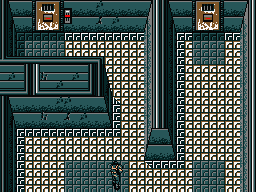 A1: If you do not enter this screen properly, you will get zapped by the electric floor. Find a safe place to stand, and activate your remote control missiles. Fire one up along the left path to the control panel just to the right of the left door. You may be in need of ammunition, so it would be a good idea to visit the room behind the left door, which can be opened with card 1. Inside, you'll find two boxes of ammo. Oddly enough, you'll also get a call on the transceiver from Schneider. He will have important news that the leader of Outer Heaven has been revealed, and it is none other than… and then Schneider is attacked before he can tell you. Unfortunately, when you leave the room, the electric floor will be reactivated, and you will have to use up another missile in the small amount of space to blow up the panel. When it's safe, run over to the right door and use card 7 to open it. Inside you will find a man named Coward Duck who has three hostages situated around him. After he challenges you to shoot him, you will receive a call from Jennifer stating Coward Duck has card 8, and that one of the hostages is her brother, and if he dies, she won't help you. 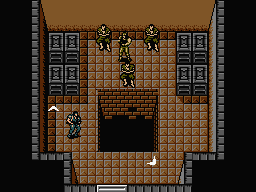 Coward Duck stays near the top of the room behind one hostage, and in front of the other two. He tosses boomerangs out at you at a fairly fast pace, and they have a wide angle of attack. Your first instinct may be to run towards him and close the distance, but if you're not careful, you may not notice the pitfall that will open up in the center of the room. Once it is triggered, you will know where to avoid running. Since you do not want to shoot the hostages, you should not attempt to shoot up at Coward Duck. The best strategy is to run just below the left or right hostage, face Duck, and shoot at his legs from the side. You are likely to get hit a lot this way, but you should be able to access rations when you run low on health. It only takes around 10 shots to defeat Duck.

Once Duck is defeated, you can collect access card 8 which appears to the left. Then rescue the hostages. The one who is Jennifer's brother will tell you that when you leave, you should take the left ladder. It's not information that is pertinent to your current situation, but it will be useful in the near future.

With Coward Duck defeated, and card 8 obtained, it is time to return to building 3 in order to find and destroy Metal Gear. Exit back to the previous room, destroy the electric floor panel again, return to the water, and swim back south until you can exit building 2 and cross the desert. Before you leave, however, you may want to ensure that you are fully stocked up on rations, ammo, and plastic explosives.