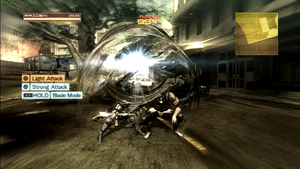 Parrying, your main form of defence.

Prime Minister N'mani's cavalcade is under attack, and it's your duty to keep him safe. After the opening cutscene ends, you're faced with three Cyborgs. To attack them, press

to do a light attack, or

to do a heavy attack. String together specific combinations of button and

inputs to carry out stronger combo attacks. You'll also need to know how to parry, or block, incoming attacks; to do so, tilt

in the attacker's direction, and press

at the same time. You need to release

back to its neutral position in order to parry multiple attacks. If you hold down

, you can stand still and attack using either

. This is known as Blade Mode, and mastery of its usage is extremely important to succeeding in this game. When you defeat the cyborgs, they may drop repair units, which you can pick up to replenish lost health. When the cyborgs have been disposed of, Boris will call on your Codec, informing you that N'mani's limo is under attack, and marks its location on your radar. Head forward and right. In this area, the Combat Manual will appear on screen informing you of Ninja Run. Hold

to dash quickly. While in Ninja Run mode, press

to do a sword attack, and

to do a sliding tackle. While in Ninja Run, you will automatically block light gunfire. Ahead of you is a barricade, blocking your path to the limo. Cut down the mesh gate, and run through (killing the enemies in this area is optional, and you don't gain from it). 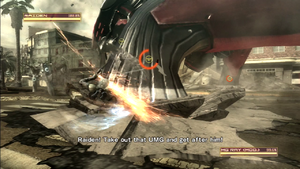 There are no rocket launchers this time; just your sword - not that that puts you at a disadvantage. Your main targets are its legs. Get underneath the RAY, and attack the targeted areas on its legs, until you are prompted to hold

to enter Blade Mode (note the kanji character 斬 (, zan?, "slash") - this will be your only prompt for Blade Mode after this chapter). This will allow you to hack away the armour on its legs, and once that has been removed, the turrets shooting at you. At various points, it will jump away from you. Use Ninja Run to close the distance quickly. Continue attacking its legs until its health is at 0.1%. It will jump away from you and swing its sword at you. Hit

together when prompted. You then need to mash

, to overturn the RAY, and finish it off by mashing 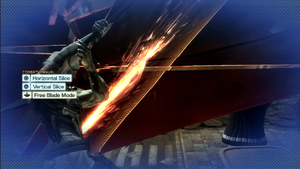 Use Blade Mode to shatter its armour.

The RAY has these forms of attack: 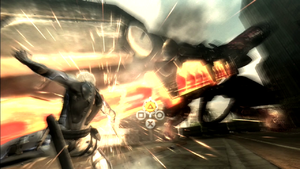 Finish the RAY by blocking its sword attack.

Once the RAY is down, enter the nearby collapsed building. Using Ninja Run, go right and up the staircase. Outside, you'll see Sundowner with N'mani in the distance. Give chase with Ninja Run. While in Ninja Run mode, you will move over and under the obstacles automatically. Cut down the gates in your way with

. Climb up the building at the end, to be greeted by a barrage of missiles from your old friend... 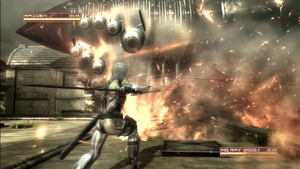 Use Blade Mode to block the missiles.

The RAY has similar attacks to before, with a handful of differences: 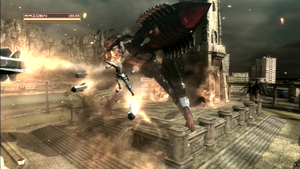 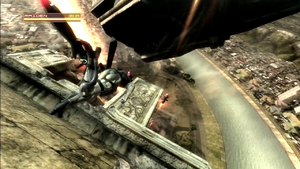 Run down the face of the clock tower, avoiding the missiles. 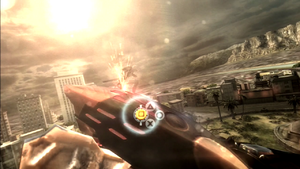 Finish the RAY by slicing it in half.

In this battle, the target area is its "mouth". Keep attacking until you are prompted to enter Blade Mode, then destroy the armour on its head. Keep up the barrage of attacks, until prompted with Blade Mode again - this time, to take out the turret on its surviving shoulder. When its health is low enough, it will jump away and fire several missiles at you. Enter Ninja Run when prompted, and run at the missiles to use them as stepping stones to approach the RAY (the prompt is the kanji character 走 (, hashiru?, "run")). When you get close enough, you are prompted to enter Blade Mode. Hit

to remove the RAY's other arm. But, of course, you're not finished yet. It will grab you in its mouth, and throw you at the nearby clock tower. Run down it, avoiding the missiles and plasma beams the RAY is shooting at you. Mash

when prompted to slice the RAY clean in half.

When the cutscene ends, you'll find yourself on board a freight train. Run forwards after Sundowner. At the end of the cutscene, he will leave you in the company of his accomplice, Jetstream Sam. In your current state, you cannot defeat him. You can use this fight as practice for combos and parrying, but you will be defeated eventually, ending the chapter.