¡Bienvenidos a México! Your next mission here in Guadalajara is to investigate a supposed underground research facility owned by Desperado, where it's been rumoured that Desperado are involved in human trafficking, and are also dumping illegal waste in the sewers underneath Guadalajara. On this mission, you're also joined by Blade Wolf, who was rebuilt and reprogrammed by Doktor after its defeat in the previous chapter, and now fights on your side. It will scout out the area ahead of you, and warn you of enemies or anything else suspicious ahead. You can also contact it via Codec for more in-depth data. Kevin also warns you of rumours of "black crocodiles", or UGs, in the sewers, so you'll have to watch out. 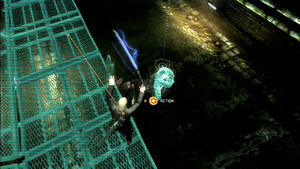 Ninja Kill the Mastiffs from the catwalks. 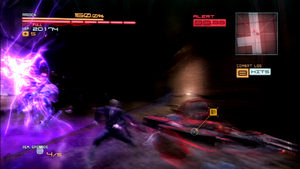 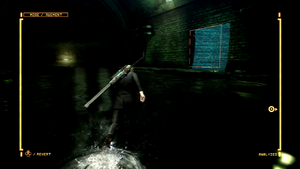 Use Augment Mode to find the hidden door.

Your first job is to actually locate the research lab. As you move through the sewers, Wolf will inform you of unidenified UGs ahead. Follow the path through the sewers. Along the way, you are ambushed by one of these UGs, the Mastiff. Destroy it as quickly as possible, then continue through the sewers. Climb the stairs ahead, and Ninja Kill the Mastiff below when the other one is facing away (use Augment Mode to spot it). Ninja Run up the boxes ahead to climb back onto the catwalk. From up here, you should be able to also Ninja Kill the second Mastiff. Cut open the gate to the left, and drop down the hole.

The next area is littered with Dwarf Gekkos, which you can cut down pretty easily. Head through to the end of the area, cut down the gate, and jump down the hole. Down here, you face three Raptor UGs. Parry their attacks, and avoid their stun attack, which is indicated by a purple flash. When one of them is defeated, the others become more fierce. It will also leave behind a Dwarf Gekko, which also must be destroyed. Once they're all dead, the boy, George, will tell you how he escaped via a drainage channel. Head to the end of this area, and cut through the door. Wolf will inform you of large numbers of UGs ahead. In this next room, pick up the cardboard box beside the door. Equip this with

, and wear it by holding

. Continue down the stairs. 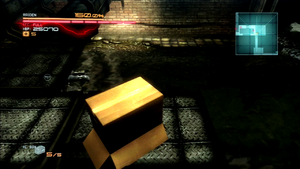 He who uses cardboard boxes wisely will go far in life.

This next area is rife with Mastiffs, and you've no real chance of a Ninja Kill without being spotted by another one. This is where your shiny new cardboard box comes in. Equip the box, and move when the Mastiffs aren't looking. The box prevents them from being able to notice you, as long as you don't move. Move slowly while wearing the box. Near the end on the right is a door, which you must cut through. Do so when no Mastiffs are looking, then quickly re-equip the box and make your way through. At the end of this next room, Wolf will inform you that it has marked the approximate location of the lab on your radar. This next area contains a Water Strider UG, which can also be fooled by the box. Head for the marked area, and enable Augment Mode. Cut at the area in the wall marked in blue, and enter the research facility. 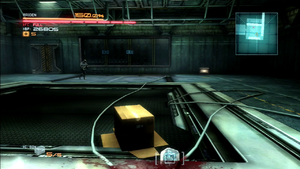 The box is even useful for getting past these cyborgs.

The entrance corridor contains several cameras. Cut them down as you sneak under them. Head through the corridor, and open the door at the top of the stairs with

. Head through this corridor, where Doktor will call and inform you that you need to find a Dwarf Gekko to gain access to the lab's data terminal. Enter the next room. Inside here, Ninja Kill the cyborg in the centre. You should also be able to sneak up and Ninja Kill the other two. If not, you'll be joined by two Raptors, but you also gain more BP. Enter the marked door to trigger a cutscene, and a battle against six cyborgs. Slice them up, and head into the room where the cyborgs came from. Walk over to the boxes on the wall, where one of them will be marked "Attention". This is the required Dwarf Gekko. Connect to it with

, and take control of it. 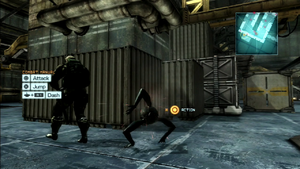 Sneak up on the cyborgs to stun them from behind. 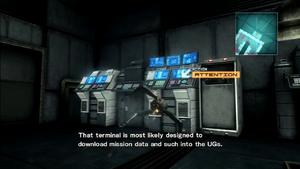 Hook up to the data terminal to download its data.

The Dwarf Gekko's controls are as follows: 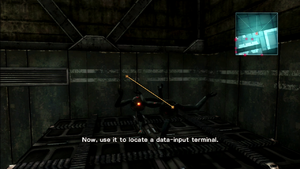 You can even play with the other Dwarf Gekkos here.

The last two, when used near other Dwarf Gekkos, will make them interact with you. Run up and stun the first cyborg, then run around the corner and stun the next one. Before going around the next corner, wait until one cyborg goes up the stairs, then run up and stun the one on the ground. Wait for the other one to come down, then stun it. Head up the stairs yourself, and go around the catwalk. Another cyborg is up here, which you can also sneak up on and stun. Jump through the shaft here, and go over to the terminal. Access it with

You regain control of Raiden immediately after the cutscene, and are ambushed by the Dwarf Gekkos and surviving cyborgs from the room you just sent your Dwarf Gekko into. Clear them out, and head for the door marked on the radar. Go through the corridor, and enter the door at the end.

Don't just run up to the GRAD, or it will shoot you down with its missiles. Instead, head up along the left wall, and parry its attacks to push it back and begin the battle. Its attacks involve ramming you with its defensive panels, a spinning kick, and locking on and shooting homing missiles at you. Ninja Run to avoid the lock-on reticle, and parry the ramming attacks and kicks. Occasionally you are prompted with Blade Mode, allowing you to smash up some of the panels. Keep attacking until it is down to about 10%, when you are prompted to press

together to weaken it, and then enter Blade Mode twice to finish it off. Enter the door at the back wall.

Through here, two cyborgs are waiting around the corner (use Augment Mode to locate them). Open the item box for a Red Phosphorous Grenade, and throw it around the corner at the cyborgs to blind them, allowing you to run in and kill them. Head down the corridor and open the door at the end. Head through the next door to finish the chapter.