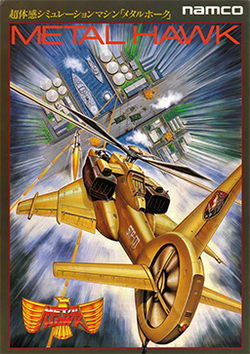 Metal Hawk (メタルホーク, literally Metaru Hōku), is a multi-directional shooter arcade game that was released by Namco in 1988, only in Japan; it runs on their System 2 hardware, and is the third game from them to allow scores not ending in "0" (the first two were Hopping Mappy and Bakutotsu Kijūtei, which were released in 1986 and earlier in 1988 respectively). Like those two older games, it used a Yamaha YM-2151 FM sound chip for its songs - but, it used a C140 custom sound chip for its sound effects and speech (as opposed to a PSG and DAC). It also had an analogue joystick for controlling.

The player must take control of a helicopter (the eponymous "Metal Hawk") and fight various enemies based on the land, in the air, and in the sea, in order to score a certain amount of points for each area within a set time limit; The game employs a perspective similar to that of Namco's own Assault (which also ran on their System 2 hardware), in which Metal Hawk stays in the centre of the screen while the playfield rotates around it. At the start of each area Metal Hawk will fly up to its highest altitude of 400 metres - but instead of rising up from the ground the playfield seems to come down away from it, and when an area is clear, Metal Hawk will again fly up to its highest altitude and off the top of the screen. These methods of entering and leaving once again reinforce the player-centric approach of the game.