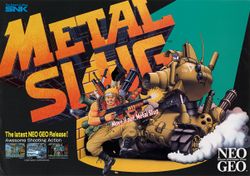 Metal Slug (メタルスラッグ, Metaru Suraggu?) is a run and gun video game for the Neo-Geo console/arcade platform developed by Nazca and published by SNK. It was originally released in 1996 for the MVS arcade platform. The game is widely known for its sense of humor, fluid hand-drawn animation, and fast paced two-player action. It is the first title in the Metal Slug series.

The player has to constantly shoot at a continual stream of enemies in order to reach the end of a level. At the end of each level, the player must confront a boss who is often considerably larger than regular enemies and takes many shots to defeat. On the way through the level, the player finds weapons upgrades and "Metal Slug" tanks that can be used not only as weapons but also as added defense.