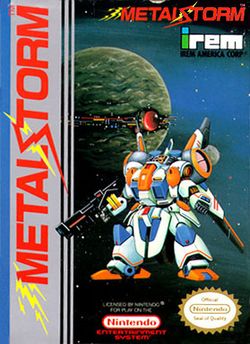 Metal Storm (also known as Juuryoku Soukou Metal Storm in Japan) is a side-scrolling platforming video game for the Famicom/NES, developed by Irem. It was released in the US during February 1991. Despite generally being well received by critics and reviewers, Metal Storm has remained a somewhat obscure release, as it was published by a lesser-known 3rd party company without much publicity and released late in the life of the Famicom/Nintendo Entertainment System.

Metal Storm would be your standard run and gun type of game if it wasn't for Irem's use of what they call the "Gravity Jump", which lets you switch the polarity of gravity, thus allowing you to walk around on the ceiling and vice versa. The stage and boss designs center on strategies that utilize this feature, since they require you to use the Gravity Jump often.