After a few drinks, you should be ready to head out. Collect the extra ammo that you received (and there is also another ammo clip as well.) Head outside, and approach the small child. He will tell you that a man wants to meet you; the child will guide you for one bullet to a man named Bourbon.

When you reach him, accept the offer to start the next mission. He will give you some ammo as well. You can also find free bullets on a nearby table. Follow him - he should have a flashlight as he approaches the dark corner. 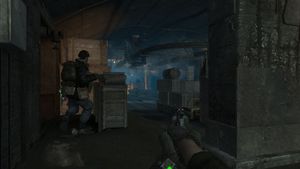 The bandit camp is ahead.

Aside from a single lurker who will run away, there is not much threat from mutants. There will be a bat scare further along, where you can find a dead body with a few clips of ammo. Further along, Bourbon will comment about the pipes containing the voices of the dead, which you may be able to listen to. There is also a path to the left with some ammo cache but also lurkers. Beyond the wrecked train cart will be a dead caravan group. Collect all ammo from them, and follow Bourbon to the right. Avoid both the cans, glass and tripwire that are visible.

When you approach the darkened room, hide in the corner as instructed, and wait for that wandering guard to get taken out. Collect his ammo, and proceed to the next room.

In this room are several bandits that have setup a barricade. You will need to kill them, and the safest way to do so is to sneak around the far side of the room. Make sure you avoid broken glass, as that will place the enemies on full alert - such glass is seen as a white spot on the grayish floor, or can be confirmed properly with a flashlight.

Once you make the first kill, the enemies may become alert, but a stealthy kill using throwing knives lets them be undetected. You can continue to snipe at them as long as you remain in dark areas. In general, there should be two on patrol before the campfire, three at the camp, and one at the back.

When they are all eliminated, Bourbon will advance to the door located on the left-hand side of the room. Open it. There will be two more bandits covering the door. The closer one will take cover behind a wall, while you can use the door as cover. The second one has a shotgun and hides behind a sandbag wall. He can be sniped at a long range safely. The third one will face the sandbag wall, and may be snuck up on for a knife kill. However, a well placed grenade should take them out without difficulty.

Going through the next door leads you to the bridge.

You will first need a running jump to the main bridge section, and use the gas mask whenever you are on the lower level. The enemies are mainly lurkers that attack in small groups.

After climbing back up, there will be a military trolley searching for bandits. Wait for it to depart, by searching the dead body nearby then continue.

When you reach the train, run towards the exit before it falls down. You will pass another train cart with some ammunition, before the collapsed tunnel. Bourbon will lower a staircase, but enemy mutants will begin to start chasing in a swarm. Sprint into the tunnel, and jump over the tripwire to reach the next level.

You end up in a graveyard. Search the bodies as instructed and as quickly as possible, as you will be switching back and forth between a normal view and a dreamlike view. Once Bourbon opens the gate, run towards it.

If you want to collect ammo and revolver with an extended barrel, you can turn towards the cylindrical chamber containing side railings. Run and jump to the body, and grab the ammo and weapon. Exercise caution in this chamber, since the railings at the entrance and next to the body will tilt and cause you to slip down below.

When you reach the gate, the sentries will signal to release the trolly as the lurkers approach. Hold your ground, and kill the lurkers as they attack. It is possible to hold off the lurkers using your knife, and let the sentries and Bourbon do the shooting.

Bourbon enters the market, but he is in debt to the sentries. However, he has a plan. In the meantime, you

In the market, you will need to head to the weapon store to purchase additional filters. They cost 8 bullets. This will be the last chance for you to purchase filters - make sure you have at least 20 minutes of filters unless you can confidently find more in the later levels. Bourbon will give you enough bullets to cover the cost. It is also possible to extend the life of filters slightly by constantly removing and wearing the gas mask, since you are free to use breathe the toxic fumes for about 30 seconds before dying.

Once you finished resupplying, head back to Bourbon, and watch him as he asks to open the gate.

Dead City consists of two maps, and you must be using the gas mask at all times (except when trying to conserve filter duration).

In the station, you will be able to find a bit of ammo which you may scavenge. The main cache is to the left of the starting location, which is covered by a spiked bar trap. You can climb up the stairs and open a box to collect some filters and ammunition. When outside, a winged mutant will fly by; hide next to the pillars. Once it escapes, jump across the cars to follow Bourbon, but the cars will fall into the water below. You will need to find the other way around through the buildings.

The first building has a mutant on the first floor. There are also two bodies containg ammo, and one with a spare filter. Climb to the third floor, and exit the building at the side. You will need to deal with three watchers here who will attack all at once. 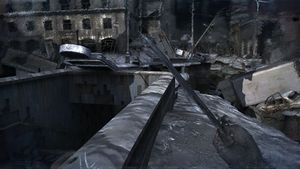 On the right: a truck containing two stickies. Offscreen to the left is a building you need to enter.

Next, you will cross the river, but you can obtain a two sticky grenades from the truck by jumping into its cargo hold. Once you have the bombs, return to the stairway and continue. You should get close to a flying mutant, which you may scare off or destroy by using a sticky grenade. Search the body it was eating, and head down to search the second body. You can also look in a truck for additional supplies.

To exit the first map, approach the nearby builidng, and walk towards the light. If you want additional supplied, including a new filter, turn right and jump over the rope. Once you have the supplies, collect the grenades from the traps and proceed down the stairs.

After the transition to the second part, turn around to collect ammunition from the dead bodies behind you. You may now follow the path forward, searching bodies as desired (including one up the staircase), and to the surface. You should encounter Bourbon.

Follow him, and you will encounter the flying mutant. This will then be followed by a large wave of watchers. The best position is to stand next to him during the fight rather than pressing yourself against the fence, as a demon will try attacking from behind. Once the fence is knocked down, run back, and he will get you to jump into the building. This leads to dry station.