By now the hint system should be pointing you to an unexplored section of the Chozo Ruins; this is the location of the next equipment upgrade.

You may notice that Beetles now appear near the Nursery Access door and there are War Wasps near the bridge. In general, new enemies appear and occasionally disappear from certain areas when you get equipment upgrades. 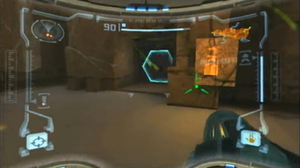 Find the Missile Lock Door that was on the left when you first entered from the Ruins Entrance. (If you're coming from Nursery Access then go right, down the ledges, and it's the door on the right.) Fire a missile to blast it open and go in.

There are two groups of Scarabs are in this room, clear them as in Nursery Access.

This room is divided into two sections by a wall. There are ledges you can use to climb over the wall on one side, but once you drop into the far section there is no going back until you get the Morph Ball visible on the far side of this room. The upgrade is guarded of course so when you approach a battle begins.

First you'll be attacked by a swarm of Beetles. There are a large number of them and you're fighting in close quarters, so don't be afraid to use missiles if there are several Beetles grouped together, but keep some in reserve since the battle is just getting started. 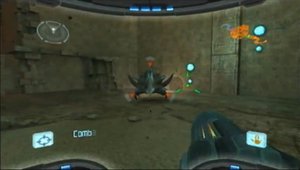 Defeat this creature to claim the Morph Ball

After you slay the swarm, you'll be attacked by a Plated Beetle. This creature behaves like a normal Beetle, however it is invulnerable to frontal attack and it always turns to face you. You need to wait for it to charge, then dodge out of the way toreador style and fire at its red abdomen before it can face you again. It dances around a bit as it works itself up for a charge, and you can soon learn the pattern to predict when you need to dodge. Missiles do the most damage but you can defeat it with your Power Beam if you run out.

Advanced strategy (WII): You'll be able to kill this Plated Beetle immediately after it rams by rapidly firing Missiles (

(on default settings)). If done at close range, all the Missiles it takes to defeat the Plated Beetle will make contact before it turns around for another run.

Note, the Plated Beetle appears later as a random enemy so there will be plenty of chances to scan it if you miss it now.

Go back to Transport Access North (the room behind the platform where you picked up the Missile Launcher. The path is a bit easier with the Morph Ball since you can just plow through Scarabs with little damage and you can roll under Plazmites. When you get there, switch to the Morph Ball and go through the hole in the far side of the room. The tunnel is just big enough for the Morph Ball to fit and it leads to a kind of vertical maze where you have to guide the Morph Ball through in side view. There are several of these mazes in the game and this one is relatively simple. Move the Morph Ball until you encounter a piston moving up and down, then ride the piston up to the next higher level like an elevator and move to the next piston. Go through the tunnel at the top level to come out at a door leading to the next room.

This is a transport similar to the one use to go from Tallon Overworld and Chozo Ruins, but it leads to a dead end at the moment. There are two other doors here, but only the one on the right leads to anything useful now.

The vault for which this room is named in right in the middle and you can see a Missile Expansion inside. It's not reachable at the moment though so save it for later. Go around to the right of the vault and scan the inscription there, then continue to the door at the far side.

This is a cave with glowing walls. A small group of Beetles attacks but they are easy to deal with. Follow the passage to the end.

You're now on a ledge high above the Plaza. There is an Energy Tank here which you may have noticed before but there was no way reach it until now. Get the tank and drop down to the main level.

Go back to the Landing Site and locate the band of light colored rock directly behind the ship. There is a Morph Ball-sized tunnel running through it and if you follow the tunnel you find a Missile Expansion among the Tangle Weeds.

There is another Missile Expansion you can get with the Morph Ball, but it's on the way to the next upgrade so we'll save it for the next page. Instead we'll cover some new exploration which is now open.

At the start of the ledges to the left of the waterfall you may notice a partially hidden passage leading down into a cave. Go through the door here.

As you might expect this is a cavern with waterfalls. There are Blastcaps on the rocks here and if you wade around in the water you'll see a low arch which you can only get through using the Morph Ball. Do this, then fire a missile to clear the door on the other side and go through.

There are two Pirates examining a broken cargo container. You might as well get a scan of them before they notice you. These are the flying variety of Pirate and when you approach they just fly off, probably the only time in the game when Pirates don't attack you on sight. When you examine the container you learn it's leaking the same Phazon that the Pirates were experimenting with on the frigate. In fact the frigate wasn't destroyed after you escaped but crashed on the far side of the lake here. The pirates you saw were either survivors or reinforcements and they've no doubt gone to report to their masters that you're still alive and on the planet.