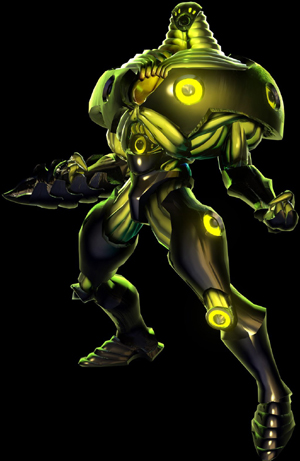 His Affinity Weapon is the Volt Driver and his Alt-Form is the Stinglarva. The Volt Driver is a very quick weapon when not charged. The charged version homes in on the opposing player and, if hits him/her, scrambles the picture on the screen so that they cannot see for a short period of time. This may seem like a giant vantage point, but the charged Volt Driver shot is the slowest out of all the affinity weapons. The Stinglarva is semi-fast and controls really well. The bombs home in on enemies if they get too close and explode. The problem is that, though small, the Stinglarva takes up a lot of surface area, so it is easy to hit. Kanden is a good choice for those who are starting to get comfortable with Hunters. 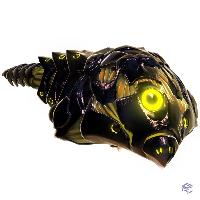 The segmented Stinglarva is one of the easiest alt-forms to maneuver. One of it's greatest advantages is that it lays low to the ground, as a result, if perched on a high platform, other hunters will have a difficult time firing at the Stinglarva. However, that means from above, a hunter will have an easy time firing the Stinglarva because of the surface area it takes up. Larva bombs break off from the Stinglarva's tail and lock onto the nearest hunter within range. This is also one of the three alt-forms that can bomb jump, although it doesn't do much, since the most you can get is one jump from it. Remember that the Stinglarva always slides down slopes, even if frozen, so don't remain stationary on a slope. Also, the Stinglarva always goes in the direction of where the head is pointing, so it cannot turn around constantly without slowing down.