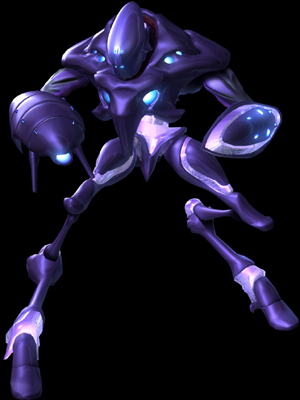 Noxus' Affinity Weapon is the Judicator and his alt-form is the Vhoscythe. Noxus is probably the trickiest Hunter control-wise. His Judicator can bounce on walls, and works well in tunnels and enclosed areas, because it keeps going until it hits a Hunter, escapes the area, or runs out of energy. If Noxus charges it, he can freeze the other Hunter in ice, leaving them vulnerable for 5 seconds, or if he is far from an enemy, it will create a vapor shield, blocking all shots from other players. This allows time for at most 4 shots with the Judicator. 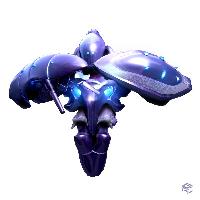 The spinning Vhoscythe is not the easiest alt-form to control, but it makes up for that with a deadly attack. If you press and hold the fire button, Vhoscythe will spin faster and produce a sharp blade. The whirring blade makes a constant noise and is not practical for stealth attacks. When the blade strikes a target it causes 48 damage, retracting quickly thereafter. The only bad part about the Vhoscythe is that when the blade is out, you will fall faster than normal.

There is a glitch that must be brought to attention. This glitch can cause major problems in Wi-Fi battles. In battles, especially in 4 player battles, there is a chance that if you attack your opponent, your DS will register the hit and theirs won't. This means that your opponent won't die. The Vhoscythe seems to be affected by this glitch quite a lot more than other weapons/Alt forms. This may occur due to connection lagging, or cheating on your opponent's part.

Probably the most commonly used purpose of a Hunter's Alternate Form is for escape. Unlike most Alt. Forms, the Vhoscythe has trouble with this. By no means is the Vhoscythe slow, but it is certainly not going to speed off uncatchable. It is recommended that, when trying to escape as the Vhoscythe, try to zigzag a lot. Another useful escape tip is the fall. With its Scythe extended, the Vhoscythe can drop from heights very quickly. By doing this near long drops you can get to a lower floor, and spin off before your opponent reaches the floor you are on. In arenas like Fuel Stack this can be incredibly useful. In low gravity arenas like the Weapons Complex, this can help as well since your pursuer is slowed on their decent whilst you descend faster.

The Vhoscythe's attack causes 42 damage. 5 hits will often defeat a max health opponent. By no means is the Vhoscythe weak, and that continuous attack is more useful than it appears. This means that no matter how fast they go, if they get too close there's little chance they won't get hit. The scythe is quite large, almost the length of the Vhoscythe itself.

Zig-zagging while trying to escape enables the Vhoscythe to get behind foes easily and quickly. This gives you a good opening for an attack.

Most players dislike Alt Spamming, where a player goes into their Alt form and doesn't come out, spamming its abilities. But the Vhoscythe is a good way to stop this. That never ending attack, that shields you from all directions except above & below means that most Alt forms will struggle to attack. It's also an effective counter to the menacing Death Alt (Located in the Processor Core, Ice Hive & Headshot arenas) as the blade nullifies the Death-alt by keeping it away from the alt-form's body. The Lockjaw's speed and 'Bermuda Triangle' ability mean that the Vhoscythe is not a good counter-attacker. The Stinglarva is also tough to defend against, since it can out-run you and attack you with homing bombs. Some Morphball users will use their bombs to stay ahead of you whilst the Half Turret will just fire at you. The Vhoscythe shouldn't be spammed, but used only to counter Alts & Death Alts only.