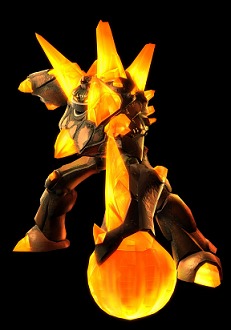 His affinity weapon is the Magmaul and his alt-form is the Dialanche. Spire is at home in lava arenas. He can stand in lava and not be damaged, as opposed to other Hunters who constantly take damage if they stand in lava. The Magmaul is flung like a grenade. If a charged shot hits a foe, it sets him/her on fire, draining his/her energy quickly. Shots from the Magmaul do bounce off the ground and walls, although not as much as the Judicator. The Magmaul does backfire often, especially if you are running and shooting at the same time. The Dialanche is a large alt-form, not too complex to control, that actually attacks enemies directly as opposed to using bombs. His Alt-Form can scale walls, a great thing to have in some arenas. This is useful if you and your enemy are too close for comfort. Spire is the biggest & slowest hunter in the game, although is coloring allows him to blend more easily into certain maps. 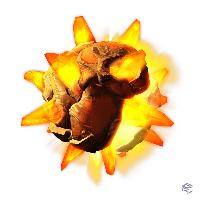 The Dialanche has the unique ability to climb walls, giving Spire the advantage in many arenas, to reach high-up viewpoints not easily accessible by other hunters, as well as avoiding certain alt. forms (although the player will likely revert to biped). Dialanche's twin titanium blades spins around the Dialanche, hitting any Hunters to close for comfort, which makes it great against defending against alt. forms such as the Triskelion. The damage range on the Dialanche is strange though, the closer you are to it determines if you are going to get hammered by it or if you will be slightly damaged. One spin of the twin blades can do a pathetic 8 points of damage, or it can knock off a hefty 64 points of damage. The Dialanche is by far the worst alt. form to make an escape with. It is simply too slow, resulting in the fact that you may often be killed in the act of escaping. Ironically, the Dialanche is killed easily with a few lobs of Magmaul shots, being that it is so slow and big. The Dialanche's ability to climb walls can allow it to hide up on a high wall, and drop down on an unsuspecting hunter.