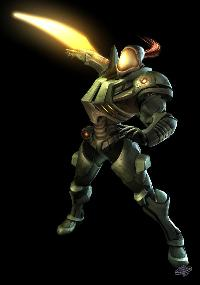 Weavels affinity weapon is the Battlehammer and his alt-form is Halfturret. The Battlehammer's projectiles fly in an arc and create a wide blast radius, which is great for pushing enemies out of node rings and off ledges and deadly drop-offs. Halfturret is an effective alt-form. Weavel upper body separates from the lower body. The upper body’s arms provide locomotion and is capable of attacking enemies with a slashing blade. The lower body is a stationary turret that fires at any hunter that comes within range. When Weavel splits into alt-form his health is halved to provide health for both entities. 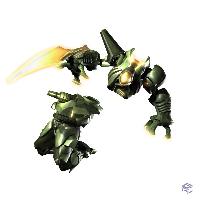 Weavel's entire lower body is a mechanical construct, giving him the capability of detaching his upper body so it can serve as a automated turret while his upper body roams the battlefield. When Weavel splits into alt-form his health is halved to provide health for both entities. When the upper half of Weavel is damaged, only he is hurt, but when the lower half is hurt, both it and the upper half are damaged.