From StrategyWiki, the video game walkthrough and strategy guide wiki
Jump to navigation Jump to search
Might and Magic II: Gates to Another World | Table of Contents | Gameplay | Walkthrough 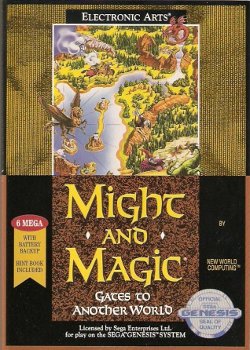 After the events of Might and Magic 1, the adventurers who helped Corak defeat Sheltem on VARN take the "Gates to Another World" located in VARN to the land of CRON (Central Research Observational Nacelle). The land of CRON is facing many problems brought on by the encroachment of Sheltem and once again the adventurers must travel through CRON, the four elemental planes and even through time to help Corak stop Sheltem from flinging CRON into its sun.

While in many ways Might and Magic 2 is a fancier version of the original, the improved graphics help greatly with navigation, and the interface added several functions that facilitated gameplay, such as a "delay" selector which allowed for faster or slower response times, and a spinning cursor when input was required (the lack of this in the original could be rather frustrating).

As with Might and Magic: The Secret of the Inner Sanctum, the player used up to six player-generated players at a time, and a total of twenty-six characters could be created, who thereafter stayed at the various inns across CRON. To continue game continuity it was possible to "import" the characters developed from the first game. Additionally, Might and Magic 2 became the first game in the series to utilize hirelings, pre-defined characters which could extend the party to eight active characters. Hirelings were controlled like regular characters but required payment each day; pay increased with level.

To the old classes of Knight, Paladin, Archer, Cleric, Sorcerer and Robber were added Barbarians and Ninjas. The available spells were extended, class "upgrade" quests were introduced, and the number of mini-quests was more than doubled. Characters now could also acquire two secondary skills (out of, say, twenty possibilities) such as mountaineering (travel through mountains) and linguism (bonus to intelligence).

Perhaps the most peculiar development in this game was the numeric scope. Character levels could reach 255, at which point they could train unlimitedly, provided they had enough money. Hit points could be extended as high as 65535 ((2^16)-1) and magic points up to 9999 ((2^13.2878)-1). To nearly any item, a "+" bonus could be added via an enchantment. This "+" bonus increased the weapon's damage or attribute bonus, as in Dungeons & Dragons, but unlike D&D the ceiling on "+" bonuses was 63! Later in the game it became necessary to have items such as the Flaming Sword +57 or the Gold Plate Armor +63.

Also, the range of enemies was quite impressive for the time, with 255 monsters varying from 5 hit points to 64000. Battles could consist of up to 255 opponents, which at some times was no big thing (i.e. 255 Skeletons), and at others nearly impossible (i.e. 255 Time Lords).

While Might and Magic 2 remained a battle-focused game, there were many puzzles to be solved, and curiosities to be discovered. There is a cave with a sex-change device, for instance, and scattered about the land are the seemingly gobbledygook Green Messages (et al). Most of the quests in the game require more than mere hack and slash.

Time travel was added, though its ramifications were practically nil. The taverns feature humorous culinary selections and there are various absurdities strewn about. Stats can be increased at the annual circus, but you'll need a collection of cupie dolls to play the games.

I: Secret of the Inner Sanctum · II: Gates to Another World · III: Isles of Terra · IV: Clouds of Xeen · V: Darkside of Xeen (World of Xeen) ·
VI: The Mandate of Heaven · VII: For Blood and Honor · VIII: Day of the Destroyer · IX · X: Legacy