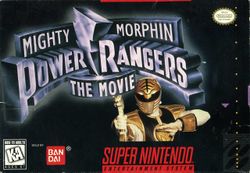 Mighty Morphin Power Rangers: The Movie, known as Mighty Morphin Power Rangers: The Movie: Featuring Ivan Ooze on the SNES version's title screen, is a game loosely based on the theatrical movie of the same name released in 1995 for the SNES and Game Boy by Bandai. The movie itself takes place in an alternate continuity to the rest of the series, as the movie was done by Saban themselves with permission from Toei and distributed by Twentieth Century Fox.

The game is known for being the hardest out of the SNES Power Rangers trilogy.