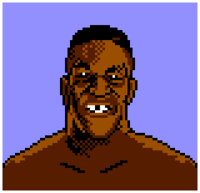 Mike Tyson is by far the toughest opponent in the game, making Mr. Sandman and Super Macho Man seem easy. He is considered by many gamers to be one of the hardest bosses in video game history. This fight requires a lot of skill, reflexes, and maybe some luck. You may go for months without beating Tyson. At the very least, it is not something you are likely to master in an afternoon. At some point you may be able to beat Mike consistently, but be assured that it requires a dedication, and many, many hours of practice.

In later versions of the game, Mike Tyson is replaced by Mr. Dream, from Dreamland. The only difference between Mr. Dream and Mike Tyson is the graphics; all other moves, patterns, and lines of dialogue remain the same.

Tyson will start out with a series of Dynamite Punches. He telegraphs them with a brief blue flash followed immediately by a swift uppercut. To make matters worse, he varies his timing very well so that it's impossible to predict, and if it connects it will automatically knock you down. If that weren't bad enough, this flurry of Dynamite Punches will last a minute and thirty seconds. The only good news is you can usually get in two jabs after each one. Until he stops doing Dynamite Punches, that is the only damage you can do to him.

The most serious error you can make is dodging too soon. Sometimes Mike will use a regular rhythm and put you into a "groove" so that you could end up dodging in time to this groove instead of watching him. If this happens, you will end up dodging while he pauses a bit longer and he will hit you as you come back in. This principle also applies to Tyson's other moves, though they are far less dangerous. Just remember: don't try to predict Tyson's timing. You can't win that way. Watch for his move and only act when you see it. This requires lightning-fast reflexes, but it's still better than dodging too soon and kissing canvas.

After this phase ends, he will throw hooks for the rest of the round, telegraphed by very brief winks. If you've done well you might manage to knock him down once, but if the round's almost over you'll want to wait to knock him down in round 2 and try to TKO him. However, it won't make a big difference unless you're already good at fighting him in round 2.

For the first thirty seconds of this round, he will throw jabs which are not telegraphed at all, but usually come in pairs. The best bet for the beginner may be to block them, or you can quick body blow to get a star, though you will run out of hearts. A good pattern to use is, immediately when the round starts, body blow, immediately body blow again, then immediately block. If done correctly, this will guarantee you a star, or a 6 second knock down if he is one hit from a knock down. If you knock him down with this strategy, hold block until he jabs twice, then continue the pattern until you run out of hearts and get tired. When you run out of hearts, he will switch to hooks and Dynamite Punches until you're normal again. Dynamite Punches will no longer automatically send you to the canvas, and you can get an average of 6 hits on him after each. After the first thirty seconds are over he will again go back to hooks and Dynamite Punches whether you are tired or not. He will almost always, throw Dynamite Punches in pairs. If he throws any punch with his right fist, though, he will always follow it with the same punch from his left. If you see him standing for a few seconds not doing anything, be careful as this signals a Dynamite Punch.

Two times in this round (at 1:30 and 2:30 on the clock) he will stand back and blink. When he does, hit him for a star and immediately block his four incoming hooks (they will be uninterrupted, rather like Piston Honda's Hurricane Rush). This is followed by two Dynamite Punches. After the four hooks, punch him four times in the face, or three times followed by an immediate uppercut. He will respond to this with two dynamite punches as well. If you hit him at the right time while he's blinking, he will instantly fall down, but it's extremely difficult to time.

If you get a star on him, the best time to use it is when you dodge a hook and jab once. It's not very safe to do it in response to a Dynamite Punch.

It's tough just to make it here, as things continue to get harder! Tyson will be throwing a lot of Dynamite Punches this round, mixed freely with his hooks. To make things worse, he'll be throwing jabs in pairs again. A long pause means you should watch for a Dynamite Punch, and a really long pause means you should block the incoming jabs. This is when he throws the kitchen sink at you, so your best bet here is to use lightning reflexes and prayers.

Cross your fingers and hope you've worn him down enough to TKO him. Even if you can't, you might win by decision if you manage to get 5,000 or more points.