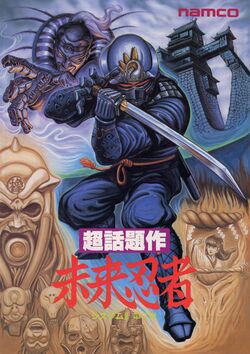 Mirai Ninja (complete Japanese title: Keigumo Kinin Gaiden Mirai Ninja 慶雲機忍外伝未来忍者), is a beat 'em up arcade game that was released by Namco in 1988 only in Japan; it runs upon Namco's System 2 hardware and is based on a Japanese movie of the same name which was released earlier in 1988 and directed by the then-29-year-old Keita Amemiya. The eponymous main character, who is also known as "Shiranui" (written in Kanji as 白怒火) was portrayed by Makoto Yokoyama and voiced over by Satoshi Itō (who also portrayed "Hiu-Kaku") - but that character does not appear in the game.

A man's body and soul are stolen, and used as part of a demon castle (known as "Kikai Kejō", written in Kanji/Katakana as 奇械ケ城); what is left becomes Mirai Ninja. He teams up with the "Chi" students whose cyber-earmuffs show matching red symbols - then, they fill their swords with ammunition, grab some neo-retro-cyber-antique guns and attack the demon robot expendable ninja squad. Each fight is won by whichever side uses more gratuitous special effects; they slay the Tron-like hover droids, who are destroyed in their shame. Then, there is a showdown with a white-armoured man with dreadlocks (named "Ashura", written in Kanji as 阿修羅), who is later reincarnated by an eclipse and some multi-coloured lightning - and after killing him, the Chi school fires a giant cannon at Kikai Kejō. It blows up, and Mirai Ninja escapes safely; in this adaptation, he also has a total of twelve stages to get through.