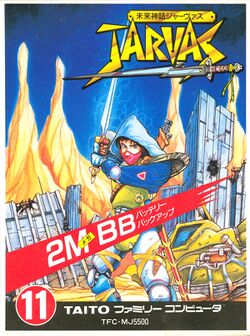 Mirai Shinwa Jarvas (未来神話ジャーヴァス, Mirai Shinwa Jarvas? lit. Future Legend Jarvas) is a RPG developed and published by Taito. It is about a man named Jarvas who travels back in time from the future to conquer the world of the past and become the leader. You must get people to join your side and take over enemy castles.

This game is generally considered pretty bad by most. When you begin the game, you are given no information about where you are and where you should attempt to go. Once you find a town, you must join a guild. You can only increase your level by returning to the guild once you have accumulated enough experience.

The cover of the box boast of having a 2 Megabit battery backup, similar to the technology used in the American version of The Legend of Zelda which does away with the need for complex passwords. The game was translated into English in 2008 by a translation group known as the Stardust Crusaders. A patch for the translation can be found here.