Murder on the Mississippi

Murder on the Mississippi | Table of Contents | Gameplay | Walkthrough

Murder on the Mississippi/Table of Contents 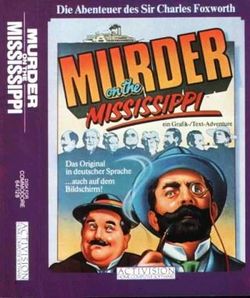 Murder on the Mississippi is a detective adventure game designed by Adam Bellin for Activision in 1986. It appeared on the Commodore 64 and the Apple II. It was licensed for release in Japan by Jaleco, who ported the game to the Nintendo Famicom as well as the MSX2.

This game is widely known as one of the first Adventure games which didn't use keyboard input at all. The classic interface had been replaced with simple joystick controls: moving the joystick causes the player's sprite to move in the direction request, and pressing the button opens a menu with appropriate commands for the current situation.

This system still proves to be very intuitive today, allowing even younger gamers to concentrate on solving the case itself instead of fighting with the interface. This task is - compared to later Adventure games - a relatively short one, though it's of comparable length as the direct competition of the time.

The difficulty level and nature of the challenges are on par with other contemporary games: Interrogating the other passengers is necessary, but it doesn't go out of hand. Finding hard pieces of evidence is the other major aspect of the game. Here, a small oversight of the game designers comes into light: It's necessary to search locations several times, standing on exactly the right spot - sometimes to find an item which wasn't even visible graphically.

Famous detective Sir Charles Foxworth is taking a holiday on the Mississippi with his servant Regis. He's just taking a stroll around the upper deck of the ship when he discovers an open cabin door. Behind it: a dead man. As it turns out, the body of Raleigh Cartwright III. Sir Charles has three days to find the murderer, because then, the ship will reach New Orleans, giving the culprit a safe chance to escape.

Murder on the Mississippi/Table of Contents