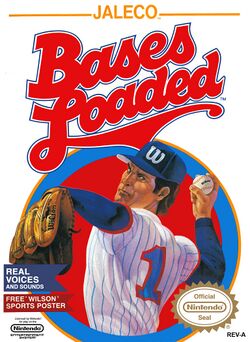 Bases Loaded, known in Japan as Moero!! Pro Yakyuu (燃えろ!!プロ野球, Moero!! Pro Yakyuu? lit. Burning!! Pro Baseball), is a baseball video game by Jaleco developed for the NES and Famicom home systems. It was released in Japan in 1987, and in North America in 1988. It was the third best selling Famicom game released in 1987, selling approximately 1,580,000 copies in its lifetime (nearly as many as Zelda II: The Adventure of Link). Each version features the names of teams and players that originate from that version's region. Bases Loaded was released on April 7, 2008 in Japan and on April 12, 2008 in North America for the Wii's Virtual Console, at the cost of 500 Wii Points.