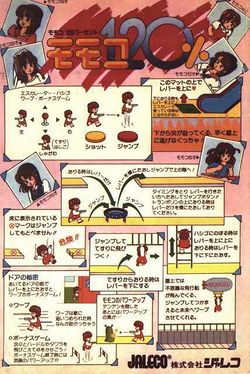 Momoko 120% (モモコ120%, Momoko 120%?) is a 1986 arcade game by Jaleco released only in Japan. This platform game features Momoko, a young Japanese girl who ages by several years each time the player reaches the next level. The goal for each level is to quickly climb several floors by escalator, ladder, or trampoline in the building she is in before the fire burning below reaches her. These level settings start out from grade school settings to office type buildings. While jumping over obstacles, she must shoot various different alien-like enemies that come after her on each floor. She can upgrade her weapon by destroying a certain enemy as well as entering special hidden doorways which feature minigames which require you to jump obstacles. These doorways can also be used as a short-cut, and sometimes they are mandatory to be used in order to climb to the next floor. When Momoko reaches the top floor of a level, she must jump onto a small blimp flying above her to beat the level.

There is one particular enemy that you must shoot in order to power up your weapon. A green stationary alien spits out tiny creatures. After you shoot all of them, the green alien will die, leaving a green orb behind with the letter P on it. Collect this orb to enhance your weapon. Powering up your weapon will typically alternate your shots from bullets to waves. Occasionally, your weapon will shoot lasers, or double your projectiles.