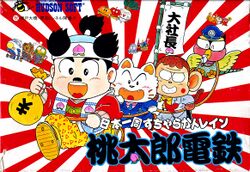 Momotaro Dentetsu (桃太郎電鉄, Momotaro Dentetsu? lit. Momotaro Electric Railway) is a train-themed board game developed by Hudson for the Famicom and published in Japan on December 2, 199. This game is the first installment of the Momotarou Dentetsu series, although it is the second appearance of Momotarou, who first appeared in the similarly titled RPG Momotarou Densetsu. Because the names are so similar, fans of the series abbreviate the RPG series as "Momo-den", and the train series as "Momotetsu". Momotetsu parodies many elements of Momo-den. As the first installment, this game contains many of the features which would go on to be the foundation of the series, but lacks many of the elements which were added to the series later on to improve its playability and fun factor.

Throughout the game, the goal is to accumulate money through a variety of means, but primarily by reaching a goal destination. Depending on the style of game you are playing, you may either be trying to achieve the greatest amount of money within a limited period of time, or you may be trying to be the first player to accumulate a particular target amount of money. There is also a humans-only mode where the goal to be the first to purchase a particular asset for a large sum of money.