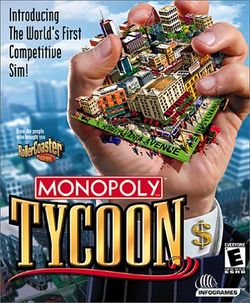 If you've played Monopoly, you'll have a fair idea of how this works. Of course, Monopoly Tycoon isn't completely true to the board game. If it were, the game would probably be uninteresting or too hard to play! Instead of buying property, houses, and hotels, you're concerned mostly with building and managing retail shops in Monopoly City (which is sort of like Atlantic City, but not). However, obtaining property, building apartments and hotels, and even chance cards still have a heavy influence on the game, and it is even possible to win (against CPU opponents, at least) without even building a single retail store in specific circumstances! How, you ask? Read on!