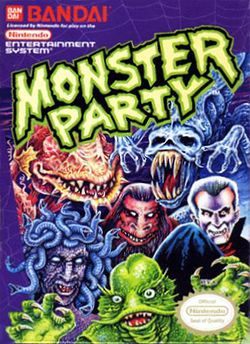 Monster Party is a video game for the Nintendo Entertainment System, released in the U.S. in 1989 by Bandai. It is a relatively obscure platform game for the console, but has a small following among NES players. Prototype screenshots of a Japanese Famicom version exist, but the game was never released in Japan.

The story centers on a child named Mark who is accosted on his way home from a baseball game by a winged, gargoyle-like alien monster named Bert who requests his assistance in ridding "evil monsters" from his realm, "Dark World". Mark is reluctant to help, but Bert insists, saying that Mark can use his "weapon" (the baseball bat in his hand) to fight enemies. He quickly whisks him away, and on the way to Dark World magically fuses himself to Mark so that they are one being (with Mark able to transform into Bert for a limited time).

This bizarre plot introduction sets up a game that is filled with variations on many traditional horror characters and themes (sometimes with ironic twists) as well as relatively novel, and always weird, characters all its own. Some traditional horror bosses the game features include a mummy, giant spiders, zombies, Medusa, and Death; persistent players will also encounter such creatures as a haunted well that throws giant plates, a large caterpillar, walking pants, a huge cat that hurls kittens, and a bouncing piece of fried shrimp. It is also interesting to note the bloody and bizarre "graphic" graphics of the game.