This is the first game in the MotoGP series. For other games in the series see the MotoGP category. 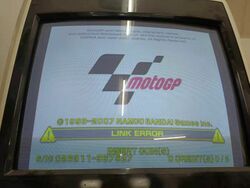 MotoGP is a racing arcade game that was released by Namco Bandai Games in 2007; it runs on the company's N2 hardware, and is based on their direct-to-console MotoGP series which ran from 2000 until 2006. It allows for a maximum of eight people to play simultaneously when up to four two-player cabinets are linked together, and the players can choose seven types of real-life motorcycles (Honda RC-211V, Yamaha YZR-M1, Ducati Desmosedici GP-6, Team Roberts KR-211V, Kawasaki Ninja ZX-RR, Suzuki GSV-R and Ilmor X3) - however, if less than eight players are present, up to seven then-current MotoGP racers shall fill in for absent ones on their own cycles as CPU-controlled opponents. There are also three real-world tracks (the Mugello Circuit in Italy, the Circuit Ricardo Tormo in Spain and the Sepang International Circuit in Malaysia) for the races to take place on; the first and second of these tracks are described as "technical" in the game while the third is described as "high speed".