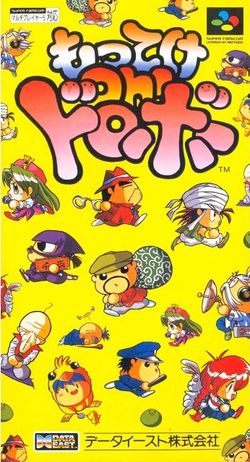 Motteke Oh! Dorobou (もってけ Oh! ドロボー, Motteke Oh! Dorobou? "Take It Oh! Thief") is a comedic Board game, developed and published by Data East for the Super Famicom in December 15, 1985. It was only released in Japan, and has never been translated from the original Japanese language. The romaji (Oh!) is written in a way that means (Oh! Thief) instead of (Ou) that would translate it (King thief).

The game has a group of thieves working against each other and also against the AI-controlled law enforcement to complete a heist and get away with a fortune of filthy lucre. The game contains random events that can help or obstruct the player's chances of success in a manner similar to the Jinsei Game series, the Japanese equivalent of The Game of Life. The Single player mode allows to select one for the player and three for their opponents between six career thieves, each with their own strengths and weaknesses. The Multiplayer mode is up to four and can be made of people and/or AI to compete against each other.