From StrategyWiki, the video game walkthrough and strategy guide wiki
(Redirected from Mr. Do)
Jump to navigation Jump to search
Mr. Do! | Table of Contents | Gameplay | Walkthrough

This is the first game in the Mr. Do series. For other games in the series see the Mr. Do category. 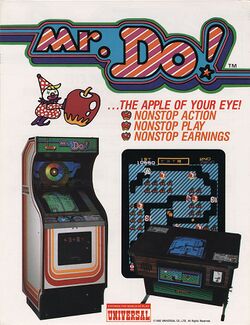 Mr. Do! is an arcade game developed by Universal in 1982. Rather than force arcade owners to buy an entirely new arcade cabinet, Universal gave Taito the rights to manufacture and sell Mr. Do! as a conversion kit. A conversion kit was meant to replace the circuitry inside existing cabinets of less popular, or, more likely, broken machines, substantially reducing the cost of a new game for the owner. As a result, Mr. Do! was wildly successful as a cheap alternative to more expensive competing titles, and ushered in the popularity of conversion kits in general.

While Mr. Do! appears to be simple at first glance, the game has considerable strategy. A majority of the gameplay seems to have been inspired directly by Dig Dug. A clown must dig tunnels through dirt while avoiding enemies and dropping large objects on their head, giant apples in this case as opposed to boulders. Mr. Do! differed by presenting the player with a weapon that ricocheted all over the tunnels and had to return to Mr. Do before he could fire again. Mr. Do could also clear a stage by consuming all of the groups of eight cherries arranged throughout the screen, by spelling "EXTRA" by killing Alphamonsters, or by collecting a diamond, rather than just by defeating all of the enemies.

Due to Mr. Do!'s popularity and presence in the arcades, a few companies sought the rights to bring the title home to console and computer players. Coleco secured the rights for the home console conversion, and released it for its own ColecoVision, as well as for the Atari 2600. Datasoft, on the other hand, purchased the rights to bring the game home on diskette to computers, and released it on the more popular systems available in North America and Europe. Mr. Do! saw a brief revival in the mid 1990s, being released as one of the last titles on the SNES, as well as a combo release for the Sharp X68000 computer along with its sequel, Mr. Do's Castle (known in Japan as Mr. Do vs. Unicorns). In addition to Mr. Do's Castle, Mr. Do went on to star in two more games, Mr. Do's Wild Ride and Do! Run Run before his series came to a close.