From StrategyWiki, the video game walkthrough and strategy guide wiki
(Redirected from Mr. Do vs. Unicorns)
Jump to navigation Jump to search 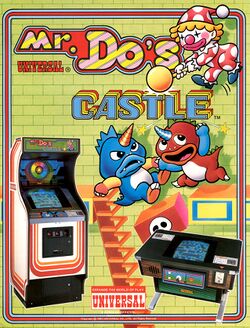 A year after the release of the original Mr. Do!, Universal decided to capitalize on its success by releasing a sequel, Mr. Do's Castle (Mr. Do! vs. Unicorns in Japan), in 1983. Although it bore little similarity to the original game, it still featured the friendly red clown, and had some other features in common such as cherries and the letters in the word "EXTRA".

In Mr. Do's Castle, it is Mr. Do's job to rid each stage of five enemy creatures known as Unicorns. The stages are made up of various levels that are composed of blocks. Like the first game, there are a couple of ways that Mr. Do could complete a given stage and advance to the next. He could pop every single cherry block out of the floors with his hammer. He could crush all of the monsters that are inhabiting the stage. Or he could succeed in smashing all of the letters in the word "EXTRA" and earn a free life.

It is hard to say whether Mr. Do's Castle was more or less popular than its predecessor. It was a more original idea (Mr. Do! was routinely compared to Dig Dug), and while it required deeper strategy, some players felt that the game was less approachable. Nevertheless, Parker Bros. took the chance to license the game for home play, and successfully distributed the game on several popular platforms slightly better than Coleco and Datasoft had managed to do with Mr. Do!. 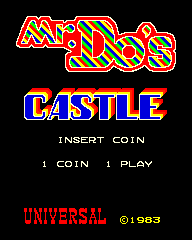