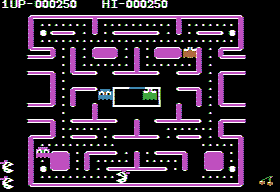 Developed by Atarisoft in 1983. As you can see in the screenshot shown left, Sue is colored as green instead of orange. 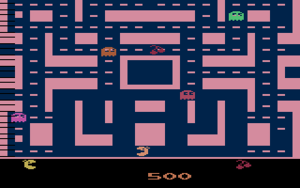 Developed by Atari in 1982. This conversion is considered a substantial improvement over the conversion of the original Pac-Man for the Atari 2600. Four mazes are included without intermissions, and Inky is colored as green instead of blue. The mazes are not exact copies of the arcade originals, but contain many of the key elements (number of tunnels, color, etc.) Regardless of which maze you are on, only two rounds need to be completed in order to move on to the next maze.

Developed by Atari in 1983. Unlike the Pac-Man conversion for the A5200, Inky is colored correctly (blue instead of green); but the mazes are still stretched out to fill the television screen. 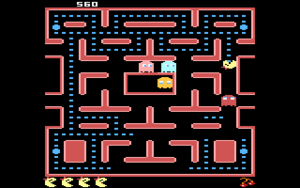 Developed by General Computer Corporation (the designers of the original ROM hack of Pac-Man, "Crazy Otto") in 1984.

Developed by Atari in 1990. The mazes are stretched out to fill the screen due to the small size of the ill-fated handheld unit.

The Lynx version also has some other features. For the extended mazes, there is a small turbo figure you can pick up (lightning symbol), under the ghost pen. This appears for a short period of time, and when you collect it, you speed up until you complete the maze or if you die on that maze you lose it.

There is a new intermission 4, called 'The bus stop', where Ms. Pac-Man picks up the four ghosts, and drives off.

There are several new extended mazes that repeat in patterns, and eventually the ghosts stop blinking and you reach one final maze that continues forever, until you end your game. 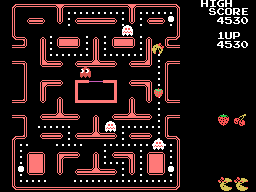 Opcode Games, developer of new titles for the Colecovision system, has developed a homebrew cartridge that includes versions of the original Pac-Man, Ms. Pac-Man, and Pac-Man Plus, with the aim of making them as faithful to the original arcade versions as they can possibly be. Despite limitation on the display resolution permitted by a television set, these conversions are considered to be quite accurate and well made.

Developed by Atarisoft in 1984. Pinky is colored purple instead of pink. Later re-released by Thunder Mountain. 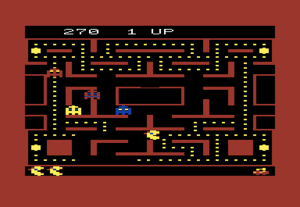 Developed by Atarisoft in 1984. Unlike Pac-Man for the VIC-20, the mazes are much more faithful to the arcade version, despite the low resolution.

Developed by Namco in 1993. You can choose between two views when you play, a full sized view that scrolls, and a half sized view that fits the whole screen. All of the ghosts are the same color, and therefore indistinguishable by sight alone.

Developed by Namco in 1999. This is a color-corrected version of the original Game Boy conversion. Other than the addition of color, the gameplay is identical to the regular Game Boy's. You have an option to see the full maze, or a scrolling version.

It also comes with a GBC conversion of Super Pac-Man. 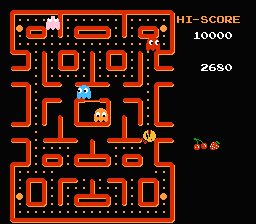 Developed by Namco in 1993. This version's choices of colors for the mazes are not completely faithful to the arcade. As with the original Pac-Man NES conversion, the maze sizes are reduced to fit the screen, so there are less pellets to eat.

There are many differences from the arcade version. The fruit counter continues to show bananas for the levels past 6, unlike the arcade which just stops. This is the hardest version of the game (even on arcade mode).

There are four new mazes:

The maze colors are completely different, and there is a totally different order including two new intermissions, Junior 2 and Junior 3. These are similar to the Junior intermission, except a new Junior is dropped.

The mazes from 25-28,29-32, as a set of 8 continue to repeat forever until you quit the game. You see intermission screens during these also.

Developed by Atarisoft in 1983. Later re-released by Thunder Mountain.

Developed by Namco in 1995. As with the NES version, this version's choices of colors for the mazes are not completely faithful to the arcade. The maze sizes are also once again reduced to fit the screen, so there are less pellets to be eaten.

There are many differences from the arcade version. The fruit counter continues to show bananas for the levels past 6, unlike the arcade which just stops. Only 2 fruit are visible.

There are at least four new mazes:

The maze colors are completely different, and there is a totally different order including new intermissions Junior 2. These are similar to the Junior intermission, except a new Junior is dropped.

The new maze order is as follows:

You see intermission screens during these also. 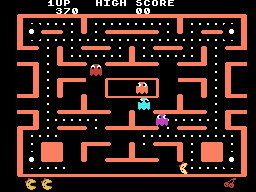 Developed by Atarisoft in 1983. Pinky is colored purple instead of pink. 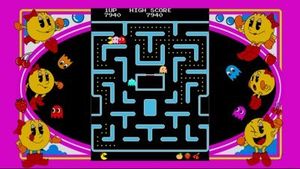 Microsoft made Ms. Pac-Man available for download on the Xbox Live Arcade for 400 points in 2007. It is very accurate to the arcade version, and contains achievement points that can be earned for completing certain tasks or stages (which can be seen on the next page). Unlike the original arcade version, however, Microsoft and Namco (who now own the rights to it) have fixed this version to go past the normal 132 rounds, until 256.

The conversions of Ms. Pac-Man which were developed by Tengen contained the original game as well as many upgrades, such as the choice between original, small, large or strange mazes, optional or obligatory use of speed booster, alternating or simultaneous 2 player games, difficult selection, and the option to continue a limited number of times. Any maze that is too large to fit on the screen scrolls vertically. Unlike the arcade version, each variation ends after round 32. There is also a fourth intermission called "The End", where Pac-Man and Ms. Pac-Man wave goodbye to the player, and the game ends. Finally, although there is an "arcade" mode on the NES/Sega Master System versions, the third maze has extra pellets on both the left and right sides of it, which are not present in the original arcade version. The Genesis/SNES versions of the game do not have these pellets, and are arcade accurate as a result. 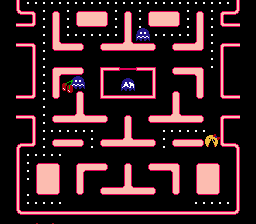 Developed by Tengen in 1990. This is the best-looking version of the game, with arcade accurate textures and colors. The sprite sizes are slightly off, but it looks more like the arcade version that the other systems. 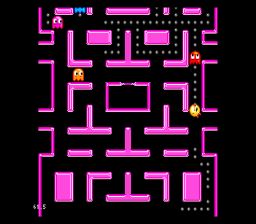 Developed by Tengen in 1991. This is a 16-bit conversion of the game, and features enhanced graphics and sounds. 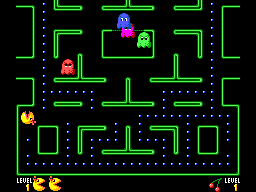 Developed by Tengen in 1991, but only released in Europe. This version's maze colors are not faithful to the arcade. 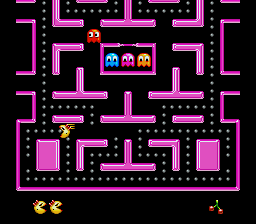 Converted and ported to the SNES by Williams Entertainment in 1996. As with the Genesis, this is a 16-bit conversion.