Castle Siege is an event which serves as an extension of the regular Guild War. 1 Guild owns the castle, and 3 attacking teams attempt to take it over from the current owners. It takes place in Valley of Loren and lasts for 2 hours. On most servers, it occurs weekly. On the retail server, once in two weeks.

Many preparations are to be made from both sides, attacking and defending. 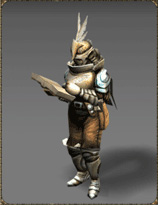 Requirements to register: Alliance with at least one other guild, at least 20 guild members.

Any guilds who want to participate must have their Alliance Masters register at the Guard NPC. After that, any guild member should submit his Sign of Lord, the more the better. The 3 guilds with the most submitted will be the 3 attacking teams. The team will be the registered guilds and their alliances, only Alliance Masters may register for CS.

The Alliance Master of the owning alliance (AKA, The Castle Owner), may (and should) purchase upgrades to renew and empower his castle for the upcoming attack. The Castle Owner have the power of the Senior NPC, The Senior NPC can set Taxes for shops in general, from all people. That's one way to collect money. The other function the Senior serves, is to repair and upgrade the castle.

The castle has 6 gates, and 4 statues. These should be repaired before the next battle, otherwise, there would be no gates, and no Guardian Statues (Will be explained later). The upgrade costs money and Jewels of Guardian. Note: Only the Castle Owner may change any of the following settings.

Stats and Prices for upgrades of the Castle (retail version):

Gates should also be repaired before the battle, otherwise they will remain broken and will not exist when the battle occur. The prices of the repair depend on the level of upgrade and the current durability condition.

Same with the gates, the Guardian Statues also require repairing if they were damaged in the last CS.

Taxes may be collected from the different NPC stores and Chaos Goblin in order to help funding the Castle's upgrades. Taxes may be withdrawn only by the Castle Owner, and only he may change it.

During the battle, the 3 invading teams will battle against the defending team. Assuming the castle was fully repaired and upgraded, the teams will have to penetrate 3 layers of gates, and destroy the Guardian Statues in order to lift the barrier of the Dragon Tower.

On the retail server, it's relatively easy to take the castle, once the Dragon Tower has been opened. It is impossible to repair the Statues or the Gates during the battle. So the main purpose is to guard those for as long as possible, and not letting anyone to destroy them.

On servers which allow Full stats (of either 32,767 or 65,535), the Statues cannot be defended for long, and the battle continues to the Dragon Tower.

The inside of the Dragon Tower is basically a square platform, on which the battle for the crown is made. Once the barrier is lifted, anyone participating in the event may go in. Outsiders (People who went in Valley of Loren during the Siege but are not part of a guild who participates) are not allowed at all.

The tower have 2 switches and a crown. In order to take the castle, both switches must be pressed by characters (Preferably high defense Blade Knights with a strong set and shield with skill) from the same alliance. Once both switches are pressed, and the characters remain within the square, the Barrier around the Crown will be lifted. In order to take the castle, the alliance master of the same invading guild must press the crown for 30 seconds. If the takeover have been successful, all characters who are not from the new Defending Alliance will be warped out, and the defending and attacking team will be exchanged. The battle will then continue with the new teams. The defending guild at the end of the 2 hour battle will win, and the castle will be theirs..

The Land of Trials is an exclusive training map for the owning guild. It can be reached from the Valley of Loren, by speaking to the guard on 140,100. The Castle Owner may place an entry fee to allow all players to go in, but with a price.

Land of Trials has a high JoG drop rate, and a higher Ancient Item drop rate. Most guilds do not allow outsiders.