At the start of the game the players can chose between three different character classes. Each class has its specific powers and items, making no class truly "better" than the other, and all three are typically used to their fullest extent when grouped together. Later on in the game, the player can create special characters only accessible to players who have reached certain levels.

The Dark Knight, shortened DK, is the most popular character, most likely because of its focus on pure physical combat. Dark Knights have naturally high HP, great weapons, and the best armor. This makes them well-equipped to be the primary attacker in a party, and coupled with the "buff" of an Elf, is a mighty force indeed. Lower level DKs generally apply their stat points as they "level up" to Strength with some stat points applied to Agility. Strength is a very important stat to them because it helps them with their attack and their equipment.

After completing the game’s first quest, the Dark Knights are promoted to Blade Knights, which have stronger stats and are able to use greater weapons and armor than those of Dark Knights. They can also learn new skills a Dark Knight can't learn, such as Death Stab (which requires level 160)and Rageful Blow (Which requires level 170). Also notice the character's change of hair from black to blond and long sleeves and pants.

Beginning with MU Online Season III, the Blade Knights can evolve to Blade Masters after completing the three-part quest. They can use all the armors and weapons for Dark Knights and Blade Knights. Moreover, there are 3rd Level Wings (Wings of Storm) with special options. blade master also have new sets and weapons...

The Dark Wizard specializes in offensive magic and can kill from a distance. Although able to handle some weapons made for Dark Knights, the Dark Wizard's weak armor and slow growth in "strength" makes this impractical. Instead, they wield magical staffs, which increase the offensive power of their spells. A well-developed Dark Wizard can grow to become a Soul Master and cause massive damage with the "Nova" spell, hitting with over 5000 points of damage, far higher than most Dark Knights can achieve. Dark Wizards, however, have the least defensive power available to any of the other classes, which makes physical combat difficult for any level. They are useful in parties, however, being able to hit from a distance with powerful spells. Lower level DWs must make a difficult choice in applying stat points: they have to put their stat points into Energy in order to learn necessary spells as well as at the same time to consider putting some points into Strength to be able to equip higher grade armory.

After completing the game’s first quest, the Dark Wizards are promoted to Soul Masters, who can use mighty and awe inspiring spells, and can equip better armor. Plus, the default character appearance transforms from black to dark blue. 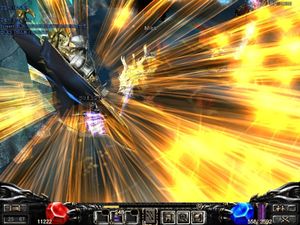 Beginning with MU Online Season III, the Soul Masters can evolve to Grand Masters after completing the three-part quest. They can use all the armors and weapons for Dark Wizards and Soul Masters. Moreover, there are 3rd Level Wings (Wings of Vortex) with special options.

Elves specialize in long-ranged combat and defensive magic. Because of the lack of synergy between their fighting and magical skills, they have been developed over time into two separate playing styles, not acknowledged by the game itself but by the players. The "Agility Elf (AE)" focuses her stats on Agility and Strength, in that order. This allows them to use the strongest bows and crossbows, and cause great amounts of damage out of harm's way. Because of their ability to attack far away from an enemy's melee attack, and a much higher defense (evade) rate, Agility Elves are great at fighting by themselves, but are also included in parties for that extra bit of damage. The "Energy Elf (EE)", focuses her attention on the Energy stat, allowing them to use monster summons and three brands of defensive spell: "Heal", "Greater Defense" and "Greater Damage" (the latter two known as "aura" and "buff", respectively, although "buff" may apply to both), but in Asian servers buffs and auras are mostly known as "++" These three spells make them invaluable to a party, allowing the top attacking players to cause more damage and receive less, and allowing lower level characters to resist attacks from strong mobs. Some players combine both styles, naming themselves "Hybrid Elves." They have high Agility in order to equip strong weapons and kill by herself, but also a good Energy stat to make herself useful in parties. Hybrids are not very popular because their buff is never as good as an EE's, and they're not as powerful as an AE. However, many AE's spend some points in Energy to gain extra Mana and AG, and to fully make use of the raised energy, they learn the corresponding buffs if applicable, and tend to be confused as Hybrids.

Any Elf which is at least level 150 can be upgraded to a Muse Elf.The steps to becoming a Muse Elf are exactly the same as that of the Blade Knight and Soul Master transformation. However, after finding the Book of Kings, the Elf will have to hunt for the Elf Tear. The new-look Muse Elf can now wear the best armour sets, wield the best bows, equip Butterfly Wings and use new skills.

Beginning with MU Online Season III, the Muse Elves can evolve to High Elves after completing the three-part quest. They can use all the armors and weapons for Fairy Elves and Muse Elves. Moreover, there are 3rd Level Wings (Wings of Illusion) with special options.

Beginning with MU Online Season III, the Muse Elves can evolve to High Elves after completing the three-part quest. They can use all the armors and weapons for Fairy Elves and Muse Elves. Moreover, there are 3rd Level Wings (Wings of Illusion) with special options

The Magic Gladiator is a combination of DK and DW, and can be unlocked as a new class when your character reaches level 220. He cannot wear a helm, and has three sets of class specific armor (Hurricane, Storm Crow, and Thunder Hawk) though he can also wear the armor of a DK (up to Dragon) or DW (but not those of a BK or SM). The Magic Gladiator can run without the need of +5 boots, and swim faster without the need of +5 gloves. Following the example set by Elves, Magic Gladiators tend to split into two groups, focusing on either magical prowess or physical might. MGs receive 7 stat points per level, as opposed to the 5 gained by three other classes.

Beginning with MU Online Season III, the Magic Gladiators can evolve to Duel Masters after completing the three-part quest. They can use all the armors and weapons for Magic Gladiators. Moreover, there are 3rd Level Wings (Wings of Doom) with special options.

An expansion character introduced in Season 3. Features traits combined of Elf and Dark Wizard classes. Imprints additional buffs and mysterious summon spells. Does not require to be unlocked through the gameplay.