The availability of different types of items on MU is considered the most interesting feature of the game. Besides the normal item variety, items may contain special bonuses that are assigned almost randomly. Creating a 'perfect' (as in maximum leveled) item within the game is almost impossible. Since items can be so different, it's quite common to have your own custom set of armor. 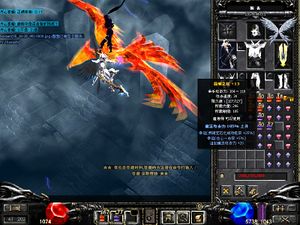 A DW wearing a Staff of Kundun+13 in the game.

The item can have different levels ranging from 0 to 13 on the global servers and often going further on other servers. The item will change colors or even glow depending on its level. While a higher level item is stronger than a lower level item, it will also require more strength and agility to be used.

Very special and rare items that can give an extra and powerful boost to your items. An excellent item will glow the colors of a rainbow, and its text will appear in a fluorescent green color. An excellent item will have additional properties which vary from increasing total mana, to increasing overall damage. An excellent item can also increase in level, have a luck option, and have a bonus option just like normal items. Excellent weapons and armors have different bonuses. Pendants are classed with weapons, and rings are classed with armors. Before the item's normal name is the word "excellent."

Regular excellent items can have one or two excellent options.

The bonuses for excellent weapons are:

and for excellent armor & shields:

Even more rare than excellent items. These items have their defense/damage values increased beyond the levels of excellent items. Ancient items are characterised with text the same color as excellent items and a blue background behind the text. A blue glow will appear around the outside of these items. Each set has a different ancient metal and unlocks different options. The item carries the prefix of the appropriate ancient metal, for example, Apollo Pad Pants or Heras Skull Shield. Each set has a specific metal, and not all sets can have ancient metals. Along with the same options as excellent items, ancient items can additionally have the following "set" options that are only applied when your character is wearing more than one ancient item of the same set. The options are unique to each set. For example, a Gaion Storm Crow set has the following options:

while an Argo Spirit Set has the following options:

These are the armor sets that are used by the characters. The sets are made of Boots, Gloves, Pants, Armor and Helm. The Magic Gladiator cannot wear a helm so its sets do not include helms, therefore giving this character class a disadvantage. The armor a character is wearing provides an easy way to guess a character's experience and overall power. Some higher level characters who are not able to afford more expensive armors may be mistaken for a low level. Wearing a complete set of armor where all the pieces come from the same armor set gives a bonus to defense rate equal to 10% of total defense.

The sets that a Dark Knight can wear are (In order of strength from least to greatest) Leather, Bronze, Scale, Brass, Plate, Dragon and Black Dragon, once a Dark Knight has completed the class change quest to become a Blade Knight, he is able to wear new sets of armor like Dark Phoenix, Great Dragon, Dragon Knight and Ashcrow. Dark Wizards are able to wear the Pad, Bone, Sphinx and Legendary sets. Once they become Soul Masters they can also wear the Grand Soul, Dark Soul and Venom Mist sets. Elves can wear the Vine, Silk, Wind, Spirit and Guardian sets. Once they become Muse Elves they can also wear the Divine, Red Spirit and Sylpid Ray armors.

Magic Gladiator are a special class that can wear any of the Dark Knight and Dark Wizard sets. However they cannot wear any of the Blade Knight or Soul Master sets, nor the DK's Black Dragon set. Since they can't have the complete set because of the inability to wear a helmet, they don't gain any bonuses in Defense or Defense Rate. To make up for this they are given their own sets that other classes can't wear. These are called the Storm Crow, Thunder Hawk, Hurricane, Volcano and Valiant.

Like the Magic Gladiator, the Dark Lord can also wear some of the Dark Knight armor: the Leather, Bronze and Scale sets, on certain private servers they can also wear Dark Wizard armor: Pad Set, Bone Set, Sphinx Set, Legendary Set. However, they are also given their own unique sets. These are named the Light Plate, Adamantine, Dark Steel, Dark Master, Sunlight and Grand Champion.

Swords are either one-handed or two-handed. They come with a variety of skills including Uppercut, Falling slash, Lunge, Cyclone and Slashing. Swords are usable by Dark Knights and Magic Gladiators, altough some have no class restriction (Such as the Blade).

Axes are like swords, but they are stronger and attack more slowly. They are usually two-handed. The strongest axe a Dark Knight can use is the Chaos Dragon Axe. It is the strongest weapon for Dark Knights, although they get better weapons when becoming Blade Knights. Elves have elven axes.

These are heavy and strong, made to crush bones, but are very slow. They are used mainly by Dark Knights, but the Elemental Mace can be used by elves and is usually accompanied by an Elemental Shield.

Crossbows, as with bows, can only be equipped by elves. They are similar to bows. The ammunition type they require are bolts. These can also come with the Triple Shot skill. The crossbow must go in the right-hand slot and the bolts in the left-hand slot.

These are powerful two-handed weapons that usually combine power and speed. They are very popular, and usually require less strength and more agility. Elves may also use these, but they won't be very strong with them. Only with weapons of this class equipped can you use the Impaling skill. You can tell whether a weapon is a spear or not (and thus Impale-compatible) by looking at how your character holds the weapon. If the character holds the weapon diagonally, it is a spear.

The staffs in Mu aren't very strong for physical attacks, but instead increase the power of the spells cast. These can only be equipped by Dark Wizards and Magic Gladiators.

Some Shields can be used by any character class, although most are designed specifically for one class only. The Grand Soul Shield, for example, is the best shield that a Dark Wizard can wear and is worn with a one-handed staff. There are also Elf-specific shields that are worn with an Elven Axe or Elemental Mace. The only skill they can come with shields is the defend skill.

These weapons can only be wielded by Dark Lords. They tend to have more inherent speed than most one-handed weapons and increase a pet's damage. 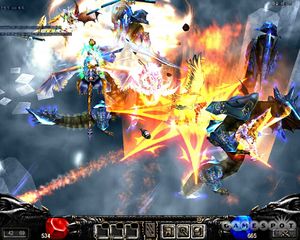 Wings provide a powerful increase in damage and decrease in damage received for a character, and also allow you to tell that a character is over level 180. Wings allow a character to hover over the ground instead of walking, and are faster than walking or running. They may have options attached, such as Automatic HP Recovery, and they also allow entrance into Icarus. To use first stage wings, the character must be level 180 or higher. Second stage wings require a minimum of level 215 (220 in MU Philippines), making them reserved to the most dedicated players. With the beginning of the 3rd Season, 3rd Stage Wings were implemented. They require level 400 in order to be equipped. They are manufactured in the Chaos Machine, and each class has its own type of wings:

These items provide resistance towards certain status effects, but can also provide HP recovery, mana increase and AG (stamina) increase through options. Rings and Necklaces/Pendants aren't stackable when it comes to elemental resistance, so if a character is wearing two or more of the same type, only the highest level one will be counted. However, any options such as recovery rate and excellent options are stackable.

You can equip guardians to give your character a boost during battle. However they aren't cheap and they are disposable items. They have 255 HP when they are picked up, and taking damage will lower their health values, although the amount of damage they receive depends on your character's defense.

These are the second most expensive, rare and useful items on MU. There are 5 different jewels, each one with its own use. According to the story, each of the jewels is a fragment of the sealing stone that held Kundun before it shattered.

These are rare items dropped only by Golden Mobs (monsters). To open a box and find out what is inside it, it must be dropped from the player's inventory onto the ground. It could drop zen, a good regular item (+4/+5 +option and maybe +luck), an excellent item, or nothing. The boxes currently implemented are Boxes of Luck, Heaven (private servers only), and Kundun. A Box of Kundun will have a level associated with it, ranging from +1 to +5, that determines the reward.

Boxes according to mob and location: