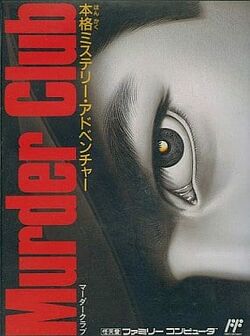 Murder Club, also known as J.B. Harold Murder Club, is a 1986 murder mystery adventure game, developed by Riverhillsoft and released for a very wide variety of platforms, mostly in Japan. It is a menu-driven game which debuted the titular detective in the long-running J.B. Harold franchise. The game was written and designed by Rika Suzuki, who would later go on to pen Hotel Dusk and Trace Memory at Cing.

A horrible murder has taken place in the sleepy little town of Liberty. Bill Robbins, a wealthy man known for his wild womanizing ways is the victim and, list of possible suspects keeps growing. As J.B. Harold you must figure out the who, what, where and why of the case. To solve the mystery you will need to travel to various locations, interview people and search for clues. The game is laid out over a grid map that displays various locations, though other than that, the game is mainly presented in the form of still photos.

The game was initially released in Japan for the NEC PC-8801 in 1986 and was later ported to various Japanese computers and home consoles including the MSX in 1988 and later the Famicom in 1989. The title was also remade in 1988 for the Sharp X68000 which featured new digitized graphics, mouse support, and a bilingual function that let the player experience the game in English. The same feature was also included in the 1992 FM Towns port.

In North America, an MS-DOS version of Murder Club was released in 1989 by Kyodai Software. The MS-DOS release was almost identical to the PC-88 original but featured a slightly different color palette and the names of certain characters and locations were changed such as doctor "Simon Randle" now being called "Steven Beckert." Eventually a Turbografx-CD port of the X68000 remake was released in Japan by Hudson Soft in 1990 which made its way to America via NEC Home Electronics in 1991. The Turbografx version contained voice acting and the same English script used in the MS-DOS release but with censored curse words and the original character names.

Murder Club would then be remade once again, along with some of its sequels, for Windows computers in 1996. These introduced new art assets that would be used in all future ports of the title. After Riverhill Soft went bankrupt, Althi took over development duties for the J.B. Harold franchise and ported Murder Club to mobile phones in 2004, the Nintendo DS in 2008, iOS in 2010 and finally the Nintendo Switch in 2017.