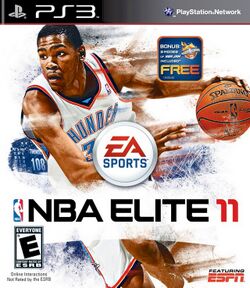 NBA Elite 11 is a basketball game in the NBA Live series. Originally, it was planned to be the start of a new series that would supersede the NBA Live series. However, due to a poorly timed demo release, the game received terrible publicity and development was cancelled. As a result, a completed iOS version was released for the iPhone and a demo version for the PS3 was leaked in very small quantity. The iOS game is no longer available through the Apple Store, and the PS3 version is regarded as "extremely rare" and is considered a collector's item.

Many of the bad publicity videos of the PS3 version were pulled from YouTube, though many of the blogs and reviews still exist on the internet. Gameplay footage of the iOS version are available, and copies of the game can be found (legitimacy not guaranteed) distributed across third party sites.