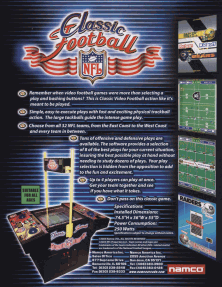 NFL Classic Football is an American football arcade game that was released by Namco in 2003; it runs upon that company's System 10 hardware, and features all thirty-two National Football League teams. Up to four players, two on either side of the cocktail cabinet, must use their trackballs to take control of their two selected teams with a pair of option selection buttons, as well as a pair of shared play selection buttons on their side of the cabinet for matching an LED to an on-screen number, and an also-shared play confirmation button for activating the number after it has been matched with the LED - and if one side of the cabinet is completely inactive its team shall be controlled by the CPU. A large amount of plays (both offensive and defensive) can be chosen, but the game will always come up with eight of the best ones for a team's current situation, meaning that the best possible ones will be at the players' fingertips without the need to go through all of them; a team's selected play is also hidden from their opponents (even if the selecting team are CPU-controlled), adding to the intensity.