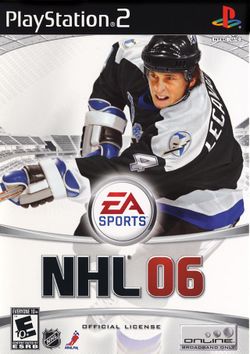 NHL 06 is the 2005-2006 season of EA Sports' NHL series. Graphics were improved slightly from NHL 2005, and the Create-A-Player feature, built on the engine from Tiger Woods PGA Tour 2004- allowing for more precision in player creation-, was reintroduced after its absence in the aforementioned earlier release. This was the last EA Sports NHL game released for the GameCube, and the first game in the series to receive an Everyone 10+ rating.