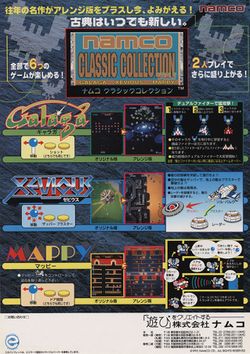 Namco Classics Collection Vol. 1 is a compilation arcade game, which was released by Namco in 1995; it was the first of only two games to run on that company's ND-1 hardware (a Motorola 68000, running at 12.288 MHz, with a Hitachi H8/3002 running at 16.384 MHz). It features three of Namco's most popular games - Galaga (1981), Xevious (1982) and Mappy (1983), with a new "Arrangement" version for each. In addition, Super Xevious (1984) is also included in this compilation, but although the game uses an 8-way joystick and two buttons they are only used in full for the Xevious variants, for both Galaga and Mappy only use a 2-way joystick and one button; in their variants, both buttons have the same function, and pushing the sticks in any direction other than left or right has no effect.

Games included in this compilation[edit]