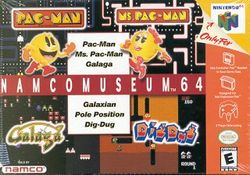 After releasing five different volumes of Namco Museum on the Sony PlayStation, Namco decided to release a Museum compilation on the Nintendo 64 and Sega Dreamcast platforms; Namco Museum 64 (simply called Namco Museum on the Dreamcast). However, instead of presenting their entire library, most of which was more successful in Japan, they focused on those games which were most popular all around the world. This compilation includes: