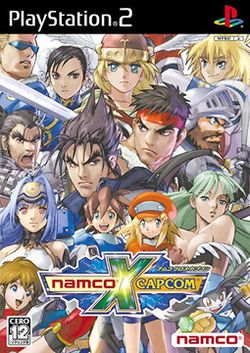 Namco × Capcom (ナムコ クロス カプコン, Namuko Kurosu Kapukon?) is a tactical RPG developed by Monolith Soft and published by Namco. It's a crossover between Capcom and Namco, featuring characters from Street Fighter, Tekken, Soul Calibur, Mega Man, Darkstalkers, and other Namco/Capcom franchises and games. The game has two protagonists along with the original roster of company characters.

The game centers around two original characters created for the game named Reiji Arisu and Xiaomu. The two of them work for a special unit called Shinra and they are tasked with investigating spirit and otherworldly disturbances. They are initially investigating a strange "sleeping sickness" in the Shibuya area of Japan, when it becomes apparent that something much larger is at stake. Characters, both good and evil, from other times and other worlds begin appearing in Japan in the year 20XX.