Even this early on in the game, there are some well-hidden clues in the game. These clues create a plot hole, as it would have been impossible for Aunt Eloise to put these clues in purposely, and are more intended to reward the best of keen-eyed players with crucial clues. 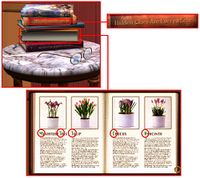 A flower by any other name...

Located on a small coffee table in Aunt Eloise's living room, is a small collection of books. If clicked on, the view zooms in, to display a not-so-hidden book entited 'Hidden Clues are Everywhere'. What is hidden though, is the actual clue located in the large tome beneath it. Upon opening this large book, you will find it is a seemingly irrelevant encyclopedia of plants. Each of the plants names are capitalised in green however, spelling out the word 'MITCH' - a very important name to come much later in the game.

Blade up on glass...

On the bookshelves in Aunt Eloise's living room is a set of red encyclopedias, which can be zoomed into. There is a hotspot on these encyclopedias, which opens an encyclopedia up onto seemingly useless information, along with a map of Florida... neither of which are useful whatsoever. The clue is actually found in the border surrounding the map, which is a sequence of morse code. Once decoded, it reads 'BLADE UP ON GLASS GETS YOU IN CLASS' - a direct hint on how to progress later on in the game.