Maxine's Diner contains a large amount of clues for such a small area in the game, though most clues point towards the puzzle in the kitchen. Finding these clues helps you realise the danger of the gas and the solution to the puzzle before you even reach it.

Care for some soup?

The first clearly visible clue in the diner is the large menu behind the counter, sporting far too many random red letters. Reading the red letters from top to bottom reads 'SOUP LADLE' on the left hand side, and 'BOLT CUTTER' on the right. This information can be used in the kitchen puzzle.

The menu at the table to the right of the diner has some secrets of its own. Once again, certain letters are written in red, showing the moderately easy clue 'DANGER'. What most people do not notice, however, is that there are also letters written in blue, 'ATOSBAGE'. This is an anagram for 'SABOTAGE'. This 'Danger: Sabotage' message refers to both the puzzle in the kitchen, and the puzzle in the boiler room.

On the opposite side of the room from the table menu, there is another table with ketchup, mustard, and some kind of tiny-jukebox-thing. Zooming into the jukebox will reveal the oh-so-familiar red letters... except this time, they are numbers. Replacing each number with its corresponding letter in the alphabet reveals the letters 'AEJK', an anagram of 'JAKE'. 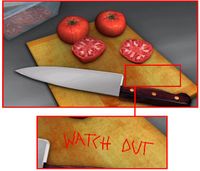 In the kitchen itself, a rather ominous kitchen knife lies on the worktop next to some chopped tomatoes. If you look carefully enough, you can see the words 'WATCH OUT' carved into the chopping board. This message implies that the 'kitchen puzzle' is nearby.

Who cares when Maxine's birthday is?

Pinned up in the kitchen is a simple work schedule, with a series of numbers subtly placed beneath. Using the same '1 =A, 2= B...' principal as before, the message can be decoded, revealing more clues to find the killer. 'Jake's fate happened deliberately, gravity was not his worst enemy.' 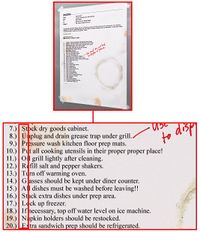 Remember: Napkin holders must be restocked!

Sellotaped onto the refrigerator is a list of instructions to employees. One of the instructions seems a little odd though... '14. Gasses should be kept under diner counter'? Reading the initials of each line shows a much more obvious hint to the puzzle, 'SUPPORT GAS LINE'.