Nankin no Adventure/Table of Contents 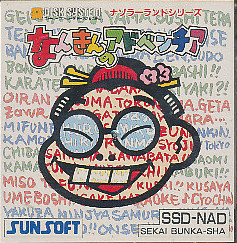 Nankin no Adventure (なんきんのアドベンチア, Nankin no Adventure?) is an adventure game developed by Sunsoft for the Famicom Disk System and published in Japan in 1988. It plays much like every other Famicom adventure game of the era. The player selects commands from a menu in order to talk to characters and solve puzzles which will eventually allow them to progress. As with many Famicom text adventures, there is a linear critical path that the player must follow in order to move to new areas and reach the next point of the story.

Nankin refers to a semi-obscure manga artist of the same name who was behind much of the art design of the game. Though the game doesn't include any of his pre-existing licenses, his distinctive art style is present throughout. This approach might be equated to Akira Toriyama's artistic involvement with the Dragon Quest and Chrono games.

Nankin no Adventure/Table of Contents