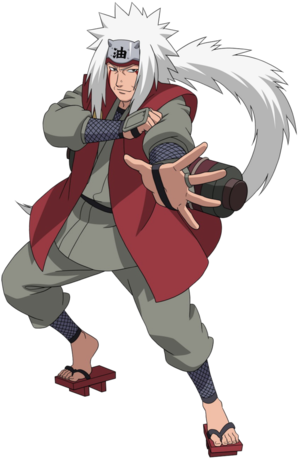 Jiraiya is a Konohagakure ninja and one of Naruto's teachers. Kishimoto has commented that out of all the master-pupil relationships he has created in the Naruto series, the bond between Naruto and Jiraiya is his favorite, noting that it makes drawing them "worthwhile". As a child, Jiraiya was under the tutelage of the Third Hokage, along with his teammates, Tsunade and Orochimaru. Jiraiya is known throughout the Naruto world as the "Toad Sage" due to his toad-related jutsu. Although still affiliated with Konohagakure, he spends much of his time traveling. Jiraiya's personality is openly lecherous, and he proudly describes himself as a "super pervert", authoring a series of best-selling adult romance novels. During Part I, he takes Naruto as his student, and returns him to Konohagakure in Part II as he begins to keep tabs on the movements of the criminal organization Akatsuki.