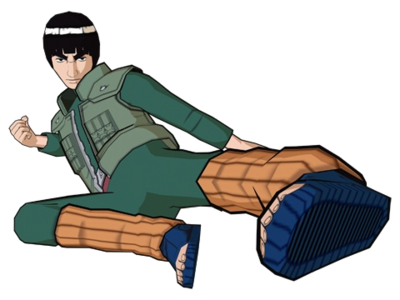 Might Guy is the leader of Team Guy, and dedicates most of his time to only one of his students, Rock Lee. Because of Guy's dedication to him, Lee has modeled himself in his master's image, mimicking Guy's distinctive green jumpsuit and shiny bowl haircut. Lee has also adopted many of Guy's mannerisms, including his "My Rules" philosophy, which involves setting tough self-imposed penalties for failure in the belief that the punishment will make him stronger. In battle, Guy specializes in physical attacks, which he constantly tries to teach to Lee. While Lee is forced to concentrate on physical attacks due to his inability to use other types of techniques, Guy deliberately chooses not to use techniques other than physical attacks. When not teaching Lee a new ability, Guy is usually found in competition with his self-proclaimed rival, Kakashi Hatake. Throughout the series, Kakashi has never displayed a particular interest in their rivalry, which only further motivates Guy to defeat Kakashi and his "coolness".