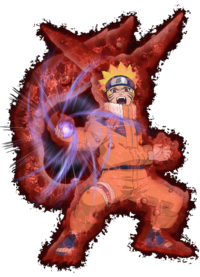 Naruto Uzumaki is the third jinchūriki of the Nine-Tailed Demon Fox. When Naruto taps into the Nine-Tails' chakra, it increases every physical aspect of his body. He is gifted with its massive amount of chakra and stamina, immense strength, increased speed, accelerated healing, and, at times, an almost impenetrable chakra shield. Naruto has unique access to the Nine-Tails' chakra, due to the seal that his father, Minato Namikaze, the Fourth Hokage, placed on him. Minato stated that he sealed half of the Nine-Tails' chakra within Naruto because he believed Naruto will someday control its power to battle Madara Uchiha.