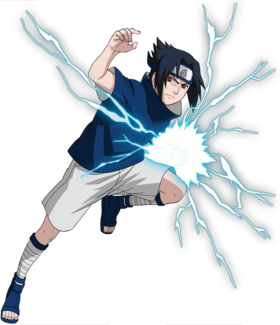 Of the abilities gained through his Uchiha lineage, Sasuke most commonly uses the Sharingan, an ability manifested through the eyes and allows the user to see a small amount into the future. Sasuke's Sharingan develops for the duration of Part I, first only allowing him to track fast-moving objects and steal jutsu, culminating with his ability to predict the movements of others. In Part II he starts to use his Sharingan to cast illusions, allowing him to manipulate and confuse others. Sasuke's Sharingan reaches its peak after Itachi's death; through the death of the person closest to him, Sasuke awakens his own Mangekyo Sharingan, gaining all of Itachi's Mangekyo techniques. However, he quickly pushes his Mangekyo Sharingan to its limits and, almost completely blind, has Madara transplant Itachi's eyes, giving him the perfected Mangekyo Sharingan.