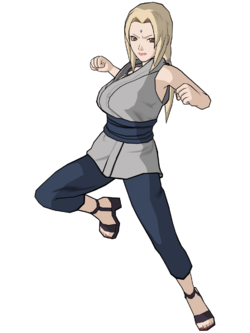 Tsunade, as well as her former teammates Jiraiya and Orochimaru, is a former student of the Third Hokage. She is also the granddaughter of the First Hokage and grandniece of the second Hokage, so many characters in the series refer to her with the Japanese honorific "hime" (meaning "princess"). Despite her connections to past Hokage, Tsunade hates the position when she is first introduced. After her brother and boyfriend Dan died in pursuit of their dreams to become Hokage, she lost faith in the title and the concept of dreams. She regained her faith in both after meeting Naruto Uzumaki, who consistently overcomes any obstacle in his own dreams of being Hokage. As a result, Tsunade accepted the position of Fifth Hokage to protect Konohakagure on behalf of everyone she has loved. Despite the importance of her position, Tsunade tends to avoid her duties, instead leaving them for her assistants. She will fulfill her role to address matters important to the village, and throughout Part II leads Konoha in combating Akatsuki. When Konoha was leveled by Pain, she transferred all of her energy to Katsuyu, her slug summon, to shield the villagers from harm. Her feeling of people that she care of caused her to fall into a coma, leading to her temporary dismissal as Hokage. Tsunade is a compulsive gambler with terrible luck. On the rare occasions that she hits a winning streak, she perceives it as a bad omen. Her age is similar to that of her former teammates Jiraiya and Orochimaru, although she constantly assumes the appearance of a twenty-year-old woman. Despite her odd personality Tsunade is a talented ninja; she has superhuman strength that allows her to reduce buildings to rubble and can heal injuries that most others would consider incurable. Her healing abilities are such that she has devised a method of Mitotic regeneration for herself, making her all but invincible in battle. At the conclusion of Part I, Tsunade takes Sakura Haruno as an apprentice, teaching her how to use both of her trademark abilities.