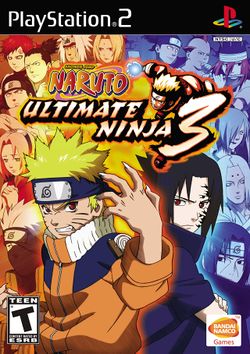 Naruto Ultimate Ninja 3 (ＮＡＲＵＴＯ－ナルト－ ナルティメットヒーロー3, Naruto: Narutimetto Hīrō 3?), is the third installment of the fighting game series Naruto: Ultimate Ninja. This game features the third largest roster in the Ultimate Ninja series, with 42 characters, and follows the storyline up to and including the Sasuke Retrieval Arc. The player can use equippable jutsu like the second game. When two jutsu of the same strength clash, the game cuts to a jutsu clash, in which the player or players must press a button repeatedly, until either jutsu wins out over the other. In this installment, the player is to both induce temporary transformations (like Sasuke's curse mark and Rock Lee's Gate of Life) through special jutsu, and other, more permanent ones, that last the entire rest of the fight (like Nine-Tailed Naruto or the Second State curse mark). The game also expands on the previous game's RPG mode, and is the first in the series to use CGI cutscenes. The player also has the ability to summon other characters, such as Gamabunta.

Additionally, the Japanese version comes with a bonus DVD that includes a special 26-minute Anime episode. It features many characters from the series, both living and dead, making it a non-canon release. The basic plot centers around a Battle Royale tournament, providing players with hints to be used in the RPG mode contained in the game.